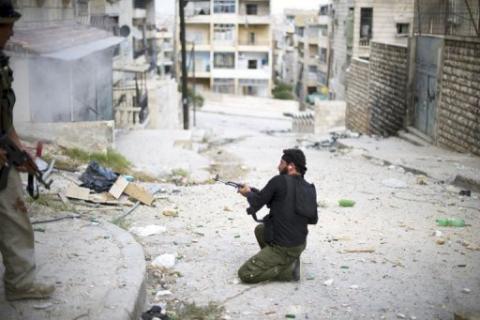 ALEPPO, Syria (AFP) Syrian troops and rebels clashed near Aleppo’s international airport on Wednesday, a watchdog said, but it was unclear whether it was part of a rebel offensive to seize the facility.

The fighting erupted at dawn in the Nayrab area, around five kilometres (three miles) from the northern city’s airport, which remained fully operational, according to the Syrian Observatory for Human Rights.

Over the past several weeks, rebels have taken to attacking military airfields in an attempt to prevent them from being used for launching air strikes, while commercial facilities have been left alone.

However, this is not the first time there has been fighting around Aleppo airport, which serves the country’s commercial capital.

Separately, four Armenian Syrians were shot dead and 13 wounded on the road from the airport as they were returning home to Aleppo from a visit to Yerevan, a relative said.

Overnight, the army pounded rebel positions across Aleppo, focused on the southern districts of Bustan al-Qasr, Sukari and Kellaseh and the northeastern districts of Sakhur, Shaar and Hanano, the Britain-based Observatory added.

Elsewhere, a boy and a girl were killed and dozens of civilians wounded when the army shelled the rebel village of Latamneh in Hama province, said the Observatory, which gathers its information from a wide network of activists.

In eastern Syria, troops shelled several districts of Deir Ezzor city, and an unspecified number of people were killed in air strikes on the town of Albu Kamal, the Observatory said.

Rebels launched rocket attacks on a number of army checkpoints in the northwestern city of Idlib, the Observatory added, with locals reporting powerful explosions and columns of smoke rising from the targets.

On Tuesday, 138 people — 93 civilians, 19 rebels and 26 soldiers — were killed nationwide, according to the Observatory. Of these, 13 people died in Aleppo, mostly civilians in Sakhur, Sukari and Bustan al-Qasr.

More than 27,000 people have been killed since the revolt against President Bashar al-Assad broke out in March 2011, according to Observatory figures.

International peace envoy Lakhdar Brahimi was in Cairo on Tuesday to meet exiled opposition leaders ahead of a planned visit to Damascus.

At the same time, British Foreign Secretary William Hague was there for talks with President Mohamed Morsi, amid a diplomatic flurry in the Egyptian capital, where Syrian neighbours gathered to discuss the conflict.

UN chief Ban Ki-moon said Brahimi will meet Assad in Damascus and insisted that “the violence must stop by both sides.”

He told reporters in Bern that he understood the frustration felt by many in the face of the UN Security Council’s apparent paralysis in dealing with the spiralling crisis.

But “while we may be frustrated and troubled by not being able to address the situation in Syria, which has reached intolerable circumstances”, he said, “we should not be overly pessimistic about the strength and the commitment of the international community, especially the international organisations.”

“Those countries who might have influence over two parties should exercise” that influence and work towards “a political resolution reflecting the genuine aspirations of the Syrian people,” Ban added. Brahimi spokesman Ahmad Fawzi said the envoy will meet “other officials, officials from the opposition as well as representatives of civil society” in Syria.

Coupled with the violence is the humanitarian crisis caused by the large number of people fleeing the country or displaced within its borders.

The UN refugee agency said the number of civilians who have fled nearly 18 months of violence has reached more than 250,000.

And it says more than 1.2 million civilians, more than half of them children, have been displaced inside Syria.

“The complexity of the crisis is one of the aspects which sets it apart and the speed with which people have fled Syria,” Edwards said.

Syria’s neighbours who have sheltered refugees have been pleading for funds, and Jordan says it needs $700 million in international aid to cope with the influx.