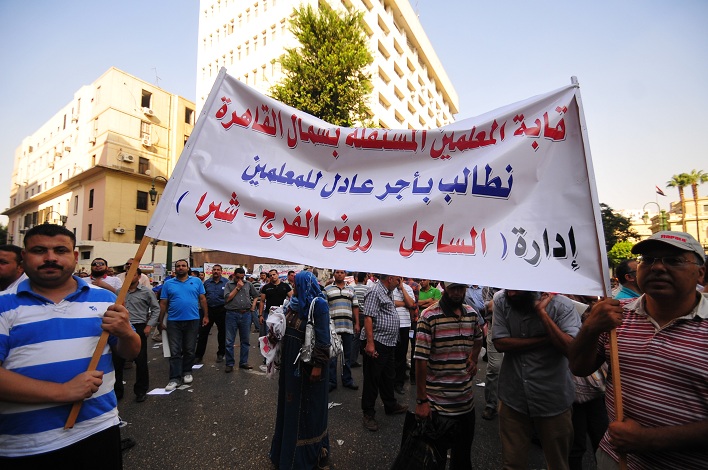 Parking space was the least of their problems as cabinet employees found three separate protests on their doorstep yesterday. Qasr Al-Eini Street was closed off by police barricades with hundreds demonstrating against the prime minister, Hesham Qandil.

Having secured their spot two days ago, teachers from all over the country continued a 100 person sit-in in front of premier’s office. They plastered posters over the gates of the building demanding to be paid a minimum amount a month.

“We want to improve the educational process, the first pillar of which is the teacher….But the teacher is oppressed and feels that they are being treated unfairly and that they are not getting something in return for their efforts,” said Awad Sa’adoon, a teacher in the sit-in from the northern governorate of Beheira.

Sa’adoon has been working in education for over 20 years, he says he earns less than EGP 1,200.

“We want a fair wage to live a decent life…. it doesn’t make any sense that a new school year will start while we are carrying all of these loads while we’re feeling humiliated and unvalued like this. The teacher is humiliated, how can I carry out my job when I earn EGP 100 a month? When I don’t even have enough money for transportation?” said Salwa Sae’ed, a computer teacher who travelled from Al-Sharqiya governorate.

Like many of the teachers in the sit-in, Sae’ed is on strike and will teach classes come the start of the school year, if authorities respond to his demands.

Not far from the teachers’ sit-in, steel, gas, and oil factory workers expressed their frustrations.

Contractors from Petrojet, a company that works in the oil and gas industry, said they were demonstrating for have been laid off unfairly.

Protester Bayoumy Moustafa, said 400 had lost their jobs in the past two years from the company. “We’ve held sit-ins and spoken to officials, no one is responding to us….we just want to go back to our jobs and make a living, our children are hungry,” he said.

Representative of the demonstrators, Mohamed Dooban, said they are not asking for a raise, just their old jobs back “all we want is to be employed; we are not asking for a permanent position in the company,” he said. Dooban has met with several officials, all of whom did not help advance his cause.

In the final demonstration, hundreds from the Arabic Factory for Steel were also protesting the fact that 350 workers and engineers in the company have not received their wages for the past two months.