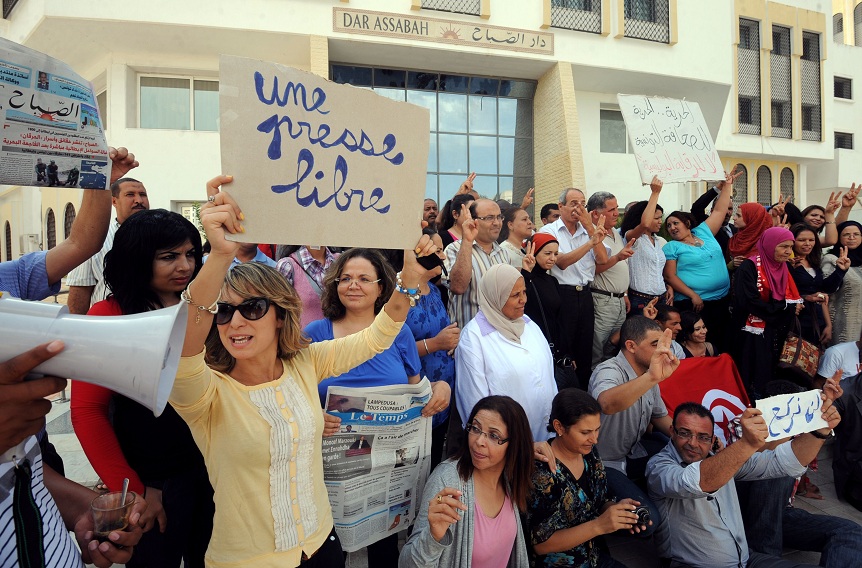 Journalists working for Tunisia’s state-run TV channels have gone on strike Wednesday to express their dissatisfaction with the government’s newly nominated directors, after journalists from the media collective Dar Assabah group staged their own protest on Tuesday against their nomination. The new director for the Dar Assabah group is Lotfi Touati, former director of the Tunisian security services.

One of the journalists protesting the government nominations is Assia Atrous, the international desk reporter for the Arabic Assabah newspaper, a wing of the Dar Assabah group. Atrous told Daily News Egypt they are facing a “hard battle for the independence of our newspaper and freedom of expression.

“What happened on Tuesday was shameful to the revolution,” Atrous said. Most of the journalists working for the Dar Assabah group refused the new nomination on behalf of the newspaper, while journalists attempted to open dialogue with the government, to no avail.

“We don’t want police mentality in our newspaper and expressed this clearly,” Atrous explained. “We tried to attract attention from the constituency as well as the government but they said nominations are final.” She said the government refused to negotiate with the journalists.

In the background of the conversation journalists were yelling, which Atrous said was part of their ongoing protest within the newspaper itself. “The strike was for one day but our protest is not over,” she said. She claimed the strike, a first in the history of the newspaper and the country, had been successful.

The Dar Assabah group is currently in talks with the trade union over the possibility of a general strike if the government does not meet their demands, but so far no decision to do so has been taken. “The trade union is really supporting us every step of the way,” Atrous said. According to her, the problem lies with the government playing a “blind role” ignoring their demands to suit the needs of the old regime. “They are real experts in monologue,” she said, “but not dialogue.”

Tunisia’s Press Freedom Index, published yearly by Reporters Without Borders (RSF), improved significantly over the last two years, but still stands at 134 out of 179 countries. This is an improvement of 30 places since the revolution ousted the former regime of President Zine El Abidine Ben Ali.

“The war on the media is not linked to us only but to different media organisations as a way to intimidate and put pressure on open and free media. This is what we are experiencing, this is what we are fighting and this is what we are trying to stop. If we give up it will be a big loss for the revolution and the coming generations,” Atrous concluded.