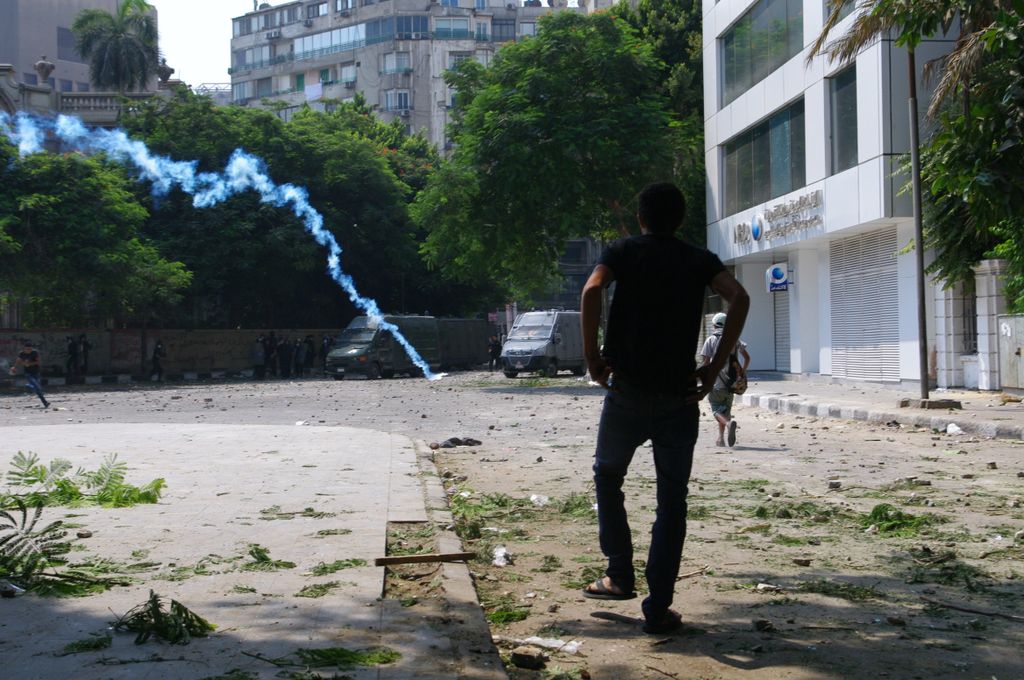 Violent clashes continued for a third day in Cairo on Thursday between Central Security Forces (CSF) protecting the United States embassy in Garden City and protesters enraged by an anti-Islamic film. Elsewhere across the Middle East, similar protests were held, including in Yemen, where the US embassy was stormed on Thursday, and in Libya, where the US ambassador was killed on Tuesday night.

Several hundred protesters continued skirmishes throughout Thursday on Omar Moqam and Abd Al-Qadr Hamza streets between Tahrir Square and the US embassy.

Protesters hurled rocks and the occasional Molotov cocktail, at one point setting a police vehicle ablaze, while CSF forces replied with tear gas and charges with armoured trucks to force the crowds back.

State-owned MENA news agency reported 23 protesters were arrested between Wednesday and Thursday afternoon and that 24 CSF officers were injured. Most of the arrested protesters were taken from Omar Makram mosque during Fajr prayers on Thursday and taken to Abdeen court, according to human rights lawyer Ahmed Helmy’s Twitter account.

A number of protestors were confirmed injured but no official figures were released. Into the afternoon on Thursday unconscious protesters were carried to waiting ambulances, suffering from tear gas inhalation. An ambulance driver estimated that around six protesters were hospitalised for minor injuries, with another 90 treated onsite for minor injuries, mostly gas inhalation.

The protests, which began on 11 September, were provoked by a crude film which insulted the Prophet Muhammad and portrayed Muslims as violent and immoral. Produced last year in the US, clips from the film were uploaded to YouTube several months ago and began circulating widely earlier in the week. Google has blocked access to the offensive video in Egypt and Libya, Reuters reported. The low-budget film was reported to have been produced by an Egyptian Coptic Christian living in the US.

Egyptian conservative Salafi Muslims, who were already planning a protest outside the US embassy in Cairo for 11 September, were alerted to the film when clips of it were shown on ultra-conservative Islamic TV presenter Khaled Abdallah’s show on Al-Nas channel on 9 September. Abdallah implicated Copts living abroad as responsible for the film.

Around 2,000 protesters gathered at the US embassy on Tuesday night, where they scaled the compound walls, entered the grounds and tore down the US flag, replacing it with a black flag bearing the Islamic declaration of faith, “There is no God but Allah.” Protesters chanted against the US and held signs condemning Egyptian Copts living abroad as being “pigs” and “dogs”. Protests continued throughout Wednesday at the embassy, until CSF troops pushed demonstrators out of the area early on Thursday morning.
While Tuesday’s protest was made up largely of older Salafis, by Thursday the protesters were mostly young men and boys.

Mohamed Hussein, a 20 year old textile factory worker, said “I am here today because I love Muhammad,” and that he held the US responsible for the film. Present since Wednesday night, he said things only became violent when the CSF used tear gas to clear the area around the US embassy.

Another young protester, who gave his name as Khaled, stressed that the protests were not against Coptic Christians, but against the makers of the film and the US government for allowing it. “It’s not just Muslims here,” he said. “There are Muslims and Copts here together.”

Al-Azhar Sheikh Abdel Basset Al Fashi said he had been present at the protests since Tuesday. “We are defending our religion against those who attack Islam and the Quran,” he said. He called for the severing of diplomatic ties with the US and called upon Arab leaders to pressure the US to prosecute Maurice Sadek, a controversial Coptic Christian living in the US who is alleged to have promoted the film. “Those who insult Allah and his Prophet will be damned in this life and the next,” he said, quoting from the Quran.

With fears of ongoing violence, many groups within Egypt and abroad have condemned the film and called for restraint.

President Mohamed Morsy issued a statement on Wednesday night condemning insults against Islam but also stating that attacking foreign embassies is unacceptable. “We Egyptians reject any kind of assault or insult against our prophet,” he said. While supporting the right to peaceful protest, he warned against further violence, quoting from the Quran that “whoever kills a soul, it is as if he had slain mankind entirely.”

The US embassy released a statement on Tuesday saying it, “condemns continued attempts by some misguided individuals to hurt the feelings of religious Muslims – just as we condemn the attempts to offend the faithful of all religions.” However the embassy adopted a more defiant stance on Wednesday, saying on its Twitter page, “neither breaches of our compound or angry messages will dissuade us from defending freedom of speech and criticizing bigotry.”

“The film is unacceptable on moral and religious levels, and marks an abuse of freedom of expression and a violation of people’s sacred beliefs,” the political arm of the Muslim Brotherhood, the Freedom and Justice party said on Tuesday night. However it called on Muslims and Copts to act together, “to work hard to counter this strife.”

A wide array of Egyptian groups, including Coptic Christian groups, Al-Azhar and parties across the political spectrum condemned the film and called upon protesters to demonstrate peacefully.

Elsewhere across the Middle East, Muslims gathered to express their disgust at the film, and the US government for its perceived accountability.

Protesters stormed the US embassy in the Yemeni capital of Sana’a on Thursday. Chanting “death to America,” protesters invaded the embassy compound, smashing windows and looting cars. The main building was not breached but protesters burned the US flag and replaced it with an Islamist black flag, AP reported. Yemeni police shot and killed a protester, according to AFP.

After armed men invaded the US consulate in the eastern Libyan city of Benghazi on Tuesday night, US ambassador John Stevens and three American consular staff were killed, alongside several Libyan security personnel. A further attack on Wednesday night as US troops were dispatched to rescue diplomats from Benghazi left a further two Americans dead, Reuters reported. President Barack Obama strongly condemned the “outrageous attack”, stating that “while the United States rejects efforts to denigrate the religious beliefs of others, we must all unequivocally oppose the kind of senseless violence that took the lives of these public servants.”
Wednesday night in Benghazi a counter-protest gathered at the US embassy, where Libyans expressed the sorrow for the previous attack, saying “this is not Islam.”

In Iraq, the Asaid Al-Haq militia, which has carried out numerous attacks on the US in the past, threatened attacks on US interests in retaliation for the film, Reuters reported. While Iraqi Prime Minister Nuri Al-Malaki called for Muslims to remain peaceful, protesters in Baghdad and Basra on Thursday demanded the government cut diplomatic relations with the US.

In Afghanistan the Taliban announced their intention to avenge the film, which prompted Hamid Karzai to postpone a planned visit to Norway, according to AP. “The reason is that the president, in light of the serious events in some Arab countries in the past day, sees a need to be in Afghanistan,” the Norwegian Foreign Ministry announced.

Further protests were reported in Morocco, Sudan, Gaza, and Tunisia. Photos from Morocco spread online on Wednesday showing young men outside the US embassy in Rabat conducting prayers as a means of protest.

Late Thursday afternoon protests had calmed somewhat, with the CSF advancing further into Tahrir Square to disperse the crowds, but many fear that violence will continue as further protests are planned for Friday. The Muslim Brotherhood’s Secretary General Mahmud Hussein on Wednesday called for “for peaceful protests on Friday outside all the main mosques in all of Egypt.” However at least one protester on Thursday afternoon questioned whether further protests would remain peaceful, he was confident that “tomorrow will be bigger.”