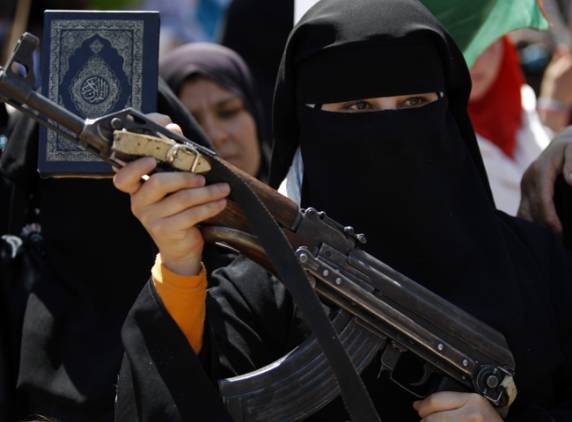 When revolution came to her hometown of Aleppo, Samar was one of the first to join up. She marched in the protests. “I used to hide six Kalashnikovs [Russian-made assault rifles] each time I crossed over [the border] under my abaya.” Although legal and cultural restrictions remain for Syrian women, they are proud of the role they have played in their civil war.

In Antakiya, near the Turkish-Syrian border, Samar and her son, Anwar are sitting in a corner cafe, discussing smuggling  Anwar into Damascus with a transporter — someone who helps people to cross. “I am wanted by the regime, and my mum’s picture was on TV yesterday as a terrorist,” Anwar said proudly.

The story doesn’t end with Samar. Thuwaiba, a woman from Tartus who lives in Canada, came to Turkey to run secret support missions to Syria. According to Firas, the transporter of Samar and her son, Thuwaiba is a brave fighter, and has been trained with weapons and in hand-to-hand combat. When asked about her role in the uprising, Thuwaiba demurred, but did tell me that when she heard the call of duty, she left her college-age daughter in Canada to join the fight.

Samar’s friend, who wanted to remain anonymous for fear of the Assad regime, is a professional TV producer and journalist, who defected to join the revolution. She is using her local knowledge and international connections to give support. “I was in Egypt meeting with Egyptian female journalists, to see how they can help us from there,” she said.

According to Suhair Atassi, a female activist and a Syrian National Council member in Cairo, there is a female brigade in Dera’a numbering around 1,000. In Antakiya, I met rebel fighter, Bassel, on his way out of Syria after spending over a year fighting across the country. “There are women fighters in Dera’a. They learned to carry and use weapons to avoid rape, and fight the Assad regime. Fatima, my cousin, destroyed two tanks from her balcony by throwing bombs on passing tanks, but the poor woman’s house was destroyed as they shelled her building” he said.

Although the Syrian constitution and labour laws promised equality of the sexes, discrimination remained in Syria under the Assad regime. Although personal status law varies according to your religion, some women are required to have male guardians contract their marriages. Adultery laws are different for men and women, with harsher penalties for women in some cases. There were, until the uprising, two hundred so-called “honour killings” per year, where a woman is murdered because of the belief that she has brought dishonour upon her family or community. Honour-based murders are not considered a serious crime in Syria; they only carry a maximum of one year in prison.

Yet, women have done better until recently than their Middle Eastern neighbours, at least in terms of political representation. According to the World Bank and the Inter Parliamentary Union, Syrian women held 12 percent of seats in the (albeit toothless) parliament, compared to the average nine percent in other parliaments in the region. One of the two vice-presidents in Syria was female; although rumours are now circulating she has defected.

This complicated scenario– the remaining challenges to equality, coupled with better than average progress– begs the question; what has motivated Syrian women to revolt against a regime which supports them in the face of oppressive cultural norms?

When first asked, Samar said “it’s every woman’s duty to participate in the revolution, not necessarily with guns but with whatever they have in hand, negotiating for medicine sales, aid, hiding Free Syrian Army fighters. It was a must to sympathise with the injured rebels and provide them safe haven.”

But when pressed, she reveals a more complicated motivation – in a culture where men are expected to protect women, he can be shamed by a woman fighting in his place “Our participation is an encouragement for men to carry arms instead of us; we need men to go to the frontline and fight instead of us, while we can help by other means possible. A lot of men who were observers of the revolution are now following our example and joining the fight. I used to show the rebels how to dress like women and hide underneath the Khimaar [full body cover of Muslim women].”

As we know from the cultural phenomenon Rosie the Riveter – a World War II symbol of feminism and power in the U.S. – women’s roles can expand dramatically and unexpectedly in wartime. It seems that women everywhere rise to the challenge. In the recent Middle Eastern uprisings, women from Tunisia to Yemen have made themselves seen and heard, from fighting at the frontline, to tweeting news to the outside world. Most notably, the young Yemeni activist, Tawakkul Karman, won the Nobel Peace Prize for her role in the revolution in Yemen.

So what next for Syrian women? The post-revolution transitions in other Arab countries has allowed a previously oppressed conservative Islam to enter politics, primarily the Muslim Brotherhood, but also the Salafi an even more literal and strict approach to religion. Will the Syrian women go quietly back to their homes and raise their children, as US women did after World War II? Or will there be a second ‘women’s revolution’ in the Middle East? Samar and her friend, both have plans for after Assad’s regime. “There will be a sectarian and religious conflict after the fall of Assad regime, but we have our preparations.” It is difficult to imagine that these passionate and hard-working women will be satisfied with second-class citizenship for long.