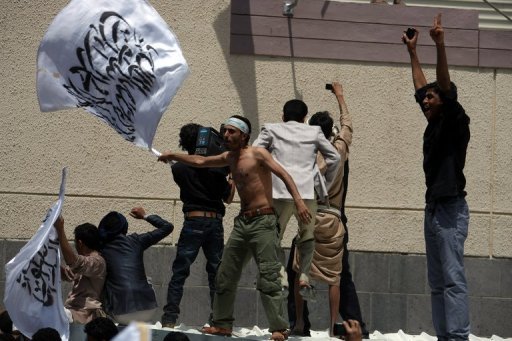 SANAA  (AFP) — Yemeni police Thursday shot dead a protester and wounded five others when they opened fire on a crowd attempting to storm the US embassy in Sanaa to protest a film mocking Islam, a security official said.

The shooting came as protesters, chanting “O, messenger of Allah… O, Mohammed,” launched a second charge on the complex which they had stormed earlier but were ejected by the security forces.

President Abdrabuh Mansur Hadi apologised to his US counterpart Barack Obama and the American people for the acts of a “mob” and ordered a probe.

“Those who are behind (the attack) are a mob that are not aware of the far-reaching plots of Zionist forces, especially those who made a film insulting the prophet,” said Hadi.

Some protesters said they saw three vehicles being torched by some of the demonstrators after they gained access to the compound through an unguarded security gate.

After being evicted from the complex on their first assault, protesters retreated about 100 metres (yards) from the gate, gathering near a checkpoint where they chanted anti-Jewish slogans.

“O, Jews: Khaybar, Khaybar. The army of Mohammed will return,” they chanted evoking a 7th century war in the west of the Arabian Peninsula in which the Muslims are said to have defeated the Jews.

They then launched a second bid to access the compound, prompting police to fire on the crowd, witnesses said.

The violent protests in Sanaa come two days after four Americans, including the ambassador, were killed when a Libyan mob attacked the US consulate in Benghazi, and protesters in Cairo tore down the Stars and Stripes and replaced it with a black Islamic flag.

Libya has launched an inquiry into the Benghazi attack, amid growing speculation that Al-Qaeda militants among the frenzied mob carried out the assault rather than simple demonstrators.

On Thursday, protesters were back outside the US mission in Cairo. Police used tear gas as they clashed with a stone- and bottle-throwing crowd.

Protests against the film were also held on Wednesday outside US missions in Morocco, Sudan and Tunisia. In Tunis, police fired tear gas to disperse a crowd of several hundred.

In other Muslim countries, security measures have tightened around US missions. Several governments tried to block internet access to the controversial film.

The low-budget movie “Innocence of Muslims,” in which actors have strong American accents, portrays Muslims as immoral and gratuitously violent.

It pokes fun at the Prophet Mohammed and touches on themes of paedophilia and homosexuality, while showing him sleeping with women, talking about killing children and referring to a donkey as “the first Muslim animal.”

Mystery has deepened over the film, with conflicting accounts from backers and promoters but no one owning up to having actually directed it.

US media initially cited someone claiming to be an American-Israeli and calling himself Sam Bacile as saying he made the film on a $5 million budget with the help of 100 Jews, but no record of such a person has been found.

Coptic Christians have been accused of promoting an Arabic-adapted version of the English-language film in Egypt, where clips were shown on an Egyptian television channel at the weekend, apparently setting off the protests.