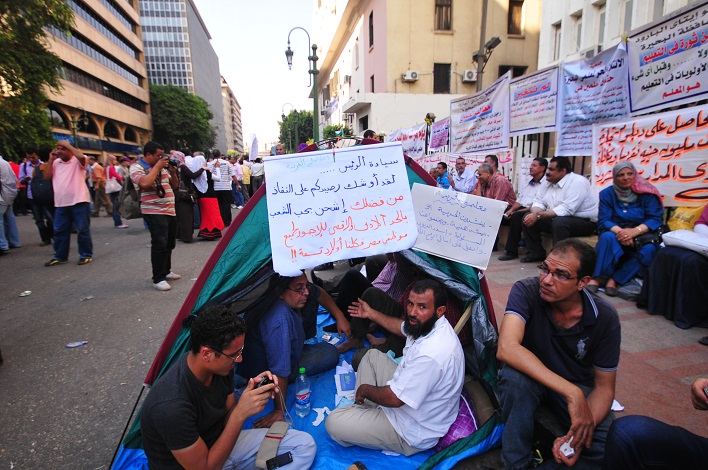 The state-run Middle East News Agency (Mena) reported that some striking teachers did not show up at work on Saturday, the first day of the new school year, although most schools will resume their academic year on Sunday. Many teachers who traveled from all over the country to take part in a protest in front of the cabinet, told the Daily News Egypt the decision to go back to work would be determined based on how the authorities respond to their demands.

The number of teachers at the sit-in had barely exceeded a hundred last week with some setting up makeshift tents. The teachers had plastered posters over the gates of the cabinet building with statements such as “we demand a dignified life for teachers” and “education first.”

According to state-run Al-Ahram newspaper, Minister of Education Ibrahim Ghoneim, said that the teachers’ strike, which was organised by an independent teachers’ union, is nothing new and that he counts on the patriotism of teachers, who he described as “guardians,” to return to work. He added that he was asked to take action against teachers who don’t go to work on school days but that he refused to do so. It seems that the authorities are not willing to see to the demands of the teachers who feel undervalued, humiliated, and demand a minimum wage as well as an increase of 6.5%.in the state budget for education.

Ghoneim added in his statements on Saturday morning that he has asked to sit down with the teachers on strike and that he is with them in their demands that there should be “advancement in the educational process.” The teachers have also called for an improvement of education.

In a separate development, transport workers are also entering a partial strike on Saturday to be held in demand of better working conditions. According to the Egyptian Trade Union Federation, workers in the governmental Public Transport Authority will start a partial strike on Saturday, which they plan to escalate on Sunday to include 27 garages throughout the Greater Cairo region. Public buses are considered a cheap method of transportation and so many Egyptians rely on them on a daily basis.

The workers have taken the decision to engage in the strike after the failure of negotiations, where they demanded the right to take sick-days, a severance package, and a transfer of ownership of the Transport Authority to the Ministry of Transport. No one from the Public Transport Authority or the General Union of Public Land Transport Workers could be reached for comment.