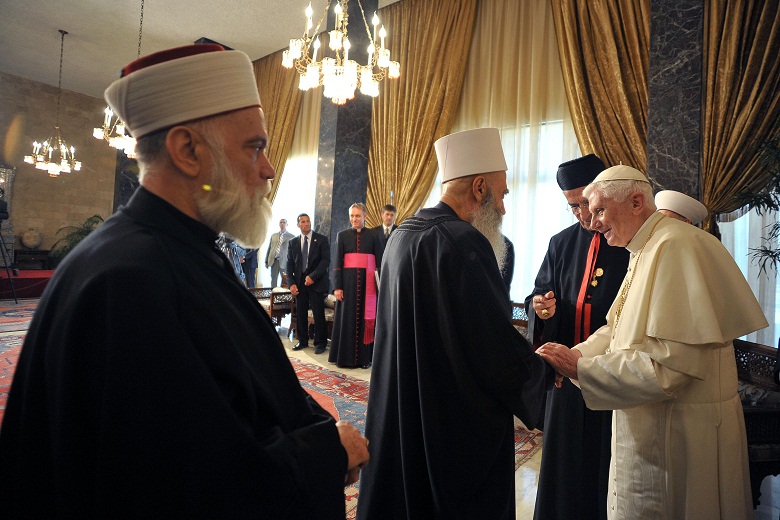 On the second day of his three-day visit to Lebanon, Pope Benedict XVI met with members of government, institutions and cultural leaders at the Presidential Palace in Beirut. He spoke with Christian president Michel Suleiman, Sunni Prime Minister NagibMikati, and Shi’a speaker of parliament Nabih Berri. The multi-confessional leadership exists as an old agreement between various religious sects in Lebanon. In an address on Saturday, the Pope referred to religion as a “fundamental right.”

“Some ideologies undermine the foundations of society. We need to be conscious of these attacks on our efforts to build harmonious coexistence,” the Pope said on Saturday according to AFP. During the trip he also hailed Lebanon and the Middle East’s pluralistic and diverse social makeup. “The particular character of the Middle East consists in the centuries-old mix of diverse elements,” he stated. “A pluralistic society can only exist on the basis of mutual respect, the desire to know the other, and continuous dialogue.”

On his Friday flight to Lebanon, Pope Benedict hailed the Levant nation telling reporters, “the successful way the Lebanese all live together surely demonstrates to the whole Middle East and to the rest of the world, that, within a nation, there can exist… coexistence and respectful dialogue between Christians and their brethren of other religions.” He also discussed an “extremely delicate” equilibrium that exists in the country between people of different faiths.

The Roman Catholic Church’s 265th pope also acknowledged conservative trends in the region, calling religious fundamentalism a “falsification of religion.” He referred to the Arab spring as a positive thing saying, “it is a desire for greater democracy, greater freedom, greater cooperation and a revived Arab identity,” evoking age-old relations and mutual tolerance between those of different faiths in the region. He condemned ongoing violence in the region, including bloody conflict in Syria, calling importation of arms a “grave sin.”

On Friday, bishops met the Pope at the St. Paul’s Cathedral in Harissa, where the pontiff signed an apostolic exhortation, which is a recommendation delivered by the Pope following a gathering of church leaders. The exhortation followed a 2010 meeting between regional church leaders who discussed fragmentation of Catholic churches throughout the Middle East, and stressed inter-religious dialogue, tackling issues of both secularisation and fundamentalism.

Pope Benedict XVI leaves Lebanon on Sunday following an open air mass at the Beirut City Centre Waterfront. The visit from the Vatican is the first to Lebanon since his predecessorPope John Paul II did so in 1997. Lebanon has the highest percentage of Christians among Arab countries, with most Lebanese Christians belonging to the Maronite Church, which is an autonomous arm of the Roman Catholic Church.