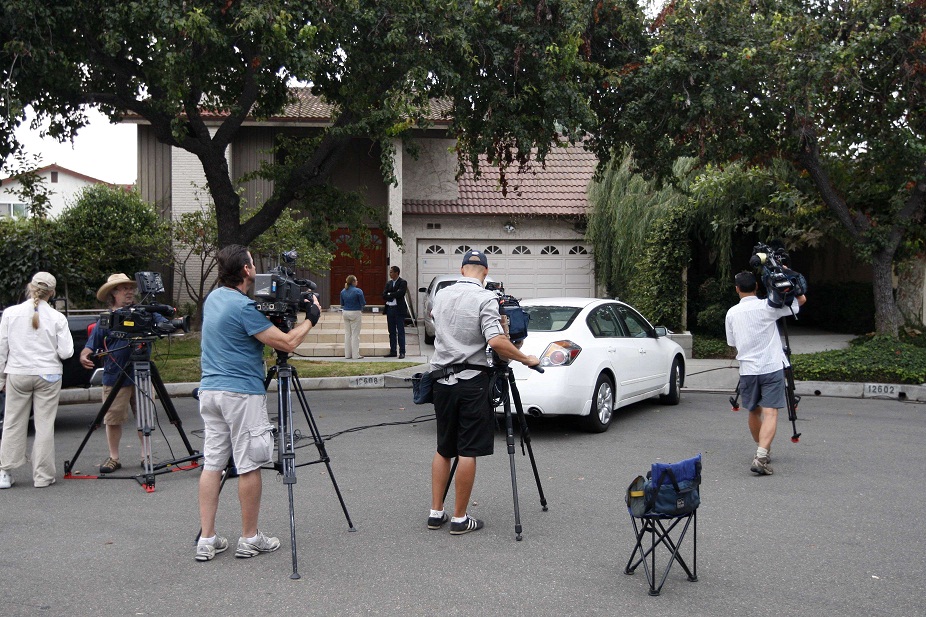 Officers in the Los Angeles sheriff’s station questioned Nakoula Basseley Nakoula, the man behind the Innocence of Muslims film, on Saturday, AP has reported. Nakoula was not under arrest, however, officials said.

Nakoula voluntarily went in for questioning with deputies in squad cars to Cerritos station. Officials were investigating if he had broken the terms of his parole, which banned him from using computers or the internet for purposes other than work for five years.

The 55 year old came under public scrutiny after segments of his film, Innocence of Muslims, sparked massive protests across the Middle East and elsewhere, leading to dozens deaths in Egypt, Libya, Tunisia, Sudan, and Yemen, including that of United States ambassador to Libya John Christopher Stevens.

Nakoula’s involvement in the film was first revealed when AP originally identified one Sam Bacile, whose YouTube account first posted the movie online, as the main filmmaker.

Bacile told AP over the phone that he was an Israeli Jew and that the movie cost USD five million that he obtained from 100 Jewish donors. He also said “Islam was a cancer.”

However, Sam Bacile turned out to be one of Nakoula’s many aliases, AP later uncovered, after the Israeli government denied it had any registered citizens with that name and AP traced his number to Nakoula’s California home.

He told AP he knew Bacile but denied being him, and showed AP his ID but covered his middle name. Nakoula is an Egyptian Coptic Christian, not an Israeli Jew as he first claimed. Sam Bacile is one of his many aliases.

Nakoula was convicted of federal bank fraud charges in 2010 and was ordered to pay $794,701 as well as serving 21 months in federal prison. He was also arrested in 1997 and charged with intent to manufacture methamphetamine, pleading guilty, according to The Daily Beast.

According to ABC, Nakoula told officers on Saturday he wrote the script in prison and produced it with his son, Abanob Basseley. He said it cost between $50,000 and $60,000 and that the money came from his wife’s family in Egypt. Parts of the movie were filmed in Nakoula’s house, which is registered under his son’s name.

Actors who participated in the movie have spoken out condemning it. They said they had been tricked and that they had been asked to read a completely different script. There are indeed clear signs of crude overdubbing every time references to Muhammad or Islam are made in the film.

“The entire cast and crew are extremely upset and feel taken advantage of by the producer. We are 100 percent not behind this film and were grossly misled about its intent and purpose. We are shocked by the drastic rewrites of the script and lies that were told to all involved. We are deeply saddened by the tragedies that have occurred,” read a statement by the cast that was published by CNN.

Actor Cindy Lee Garcia said the cast were told they were filming a movie called Desert Warriors depicting life in Egypt 2,000 years ago. She said there were no references to Muhammad at all and that the main character was called “Master George.”

She said the producer referred to himself as Bacile and said he was a real estate mogul from Israel, but that she had seen him conversing in Arabic with others on the set.

A casting sheet obtained by AP confirms the actor’s claim. It has no references to Muhammad or Islam whatsoever.

Nakoula also seemingly deceived the film’s director, Alan Robe. Robe, a director of soft-core pornography has since gone into hiding. A friend described him as “non-political” Gawker reporter.

Steve Klien, a man involved with anti-Islam “hate groups” according to the Southern Poverty Law Centre, told AP he was asked by Nakoula to be the film’s spokesperson. Klien is aware that Bacile is not the filmmaker’s real identity and told AP it was an alias.

Media for Christ, a Christian charity based in Duarte, has been linked with the film’s production. The organisation obtained permits to shoot the movie in August 2011. Its founder, Joseph Nassralla Abdelmasih, who is also an Egyptian immigrant, has also gone into hiding.

The movie was up on Nakoula’s YouTube account as early as June 2012. It first gained attention when Islamist talk show host Khaled Abdallah played part of it dubbed in Arabic on the Egyptian Al-Nas channel.Nakoula said he did not know who dubbed it in Arabic but said he spoke enough Arabic to tell the translation was accurate.