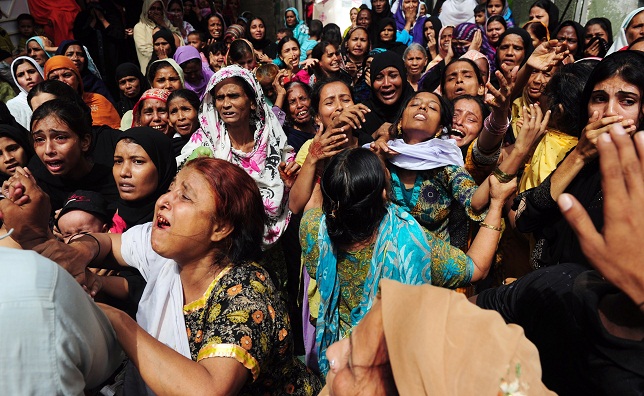 Three Factory owners turned themselves in on Friday to face murder charges after 289 workers burnt to death in Pakistan’s worst ever industrial fire, reported AFP.

Abdul Aziz, Mohammad Arshad and Shahid Bhaila appeared in the high court in Larkana, 450 Kilometres north of Karachi, because they feared for their lives in the city that is mourning over workers who burnt to death or suffocated in a massive fire that engulfed Ali Enterprises garment factory in Karachi.

A murder case was registered on Thursday based on the “utter negligence” the factory owners demonstrated regarding workers’ safety.

The three owners, who have already been barred from leaving the country, were granted “protective bail” for eight days, which means they won’t be detained before 22 September. The judge ordered them to appear in court in Karachi before the bail expires, their lawyer Aamir Mansoor told AFP.

In Karachi, the industrial heart of Pakistan, life came to a halt on Thursday as its inhabitants mourned and paid their respects to the victims who died in the fire.

Rauf Siddiqui, the Minister for Industry and Commerce of Sindh province, where Karachi is located, submitted his resignation on Friday to avoid any interference suggestions regarding the fire investigations, reported AFP.

Investigators studied a two minute section of footage that was filmed by six closed-circuit cameras installed on the factory’s first floor.

Senior Police official Niaz Khoso told AFP workers were trapped inside the factory as the only exit was through an electronically locked door. The Guardian reported that the lock was used to prevent workers from leaving their shifts early, however, there were no emergency exits and the electronic lock failed when the fire disrupted electricity.

“The fire is definitely accidental, but what is more important and criminal is that the owners had given no exits to the workers to get saved in case of emergency,” Khoso told AFP.

He described the footage saying that large quantities of finished garments were piled on the floor while workers were working calmly. Then sparks appear, coming from the poor quality power cables that were installed unusually low on the walls.

“At 18:56 the images of fire come on screen. Workers start running helter-skelter as everything gets murky with the smoke amid the sparks of fire,” he said.

He added that at the same time people in the building sensed the fire and started running while cameras were destroyed one by one ending the footage.

The tragedy fuelled people’s anger against a failure to implement industrial safety measures for workers who already suffer bad working conditions and low wages. The government was criticised for allowing industrialists to put profits ahead of workers’ safety.

Ali Enterprises factory, which was engulfed by massive fire on Tuesday, produced ready-to-wear clothes for companies in Europe and North America, whose identity remain unclear.

On the same night, fire erupted in a shoe factory in Lahore claiming 25 lives.