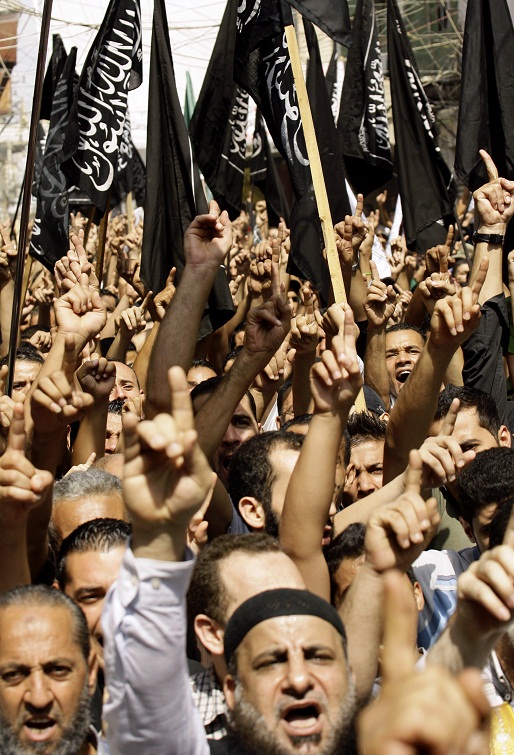 Public reactions to the controversial film which insults the prophet Muhammad have been wide and numerous, with reactions coming from inside Egypt as well as from world leaders. Considering the Islamist governments which have come into power since the last uprising, the focus on the Islamists’ reactions to the film and to the violence of angry protesters has been under the spotlight.

Most Islamist figures inside Egypt, have been outspoken about their contempt with both the release of the film and the actions of the angry crowds.

The ruling Freedom and Justice party (FJP), the Muslim Brotherhood’s political arm, said peaceful protests against the film a right, better yet a duty, which any Egyptian citizen should abide by, adding that the Islamic religion necessitates the protection of embassies, consulates, and installations. The FJP condemned the killing of the US ambassador to Libya, Christopher Stevens, saying the US stop the broadcast of the film and punish those involved in it. The statement included the FJP’s calls for an international agreement criminalising attacking religions and their symbols. The Muslim Brotherhood called for protests in front of mosques nationwide, as well as a symbolic protest in Tahrir square, in order to voice disapproval over the film but did not encourage any violence.

The Brotherhood’s official Twitter account Ikhwanweb, offered its condolences to the US embassy in Cairo for the death of the US ambassador to Libya, assuring that it’s well understood that the film doesn’t represent all US citizens. In one controversial tweet, Ikhwanweb stated relief that “none of US Embassy Cairo staff were harmed & hope US-Egyptian relations will sustain turbulence of Tuesday’s events”, only to be met with a reply from the US embassy’s official account notifying them that the embassy reads their Arabic feeds as well. The Twitter interaction soon gained widespread popularity, as Ikhwanweb requested specifying an incident where their Arabic feeds were inconsistent with their English, acknowledging that the US embassy is “under a lot of stress”.

Al-Azhar also had its share of condemnatory statements, it stressed the importance of not allowing Muslims’ anger to surpass the limits allowed by Islamic behavior. It also stated its understanding that such insults do not come from normal individuals but from the institutions of colonial domination, which Islam is fighting with all its might.

For his part, Al-Azhar’s Imam Ahmad Al-Tayeb issued a statement to the United Nations secretary general Ban Ki-Moon, where he demanded the issuance of an international law which prohibits insulting the Islam – alongside other semitic religions, and their symbols, according to state-owned news agency MENA. Al-Tayeb said insulting Islam has disturbed world peace and jeopardised international security; matters which the UN should protect. The statement also touched upon the necessity of protecting diplomatic missions and embassies worldwide.

The Al-Nour Salafi party denounced the film and called for legal action against its producers, it “understood” the anger of millions of Muslims while urging them to stick to peaceful protests. The party also condemned any use of violence against embassies and diplomatic delegations.

The party’s spokesperson Nader Bakkar expressed his point of view through Twitter. In his personal Twitter account, Bakkar stated that the “most entangled in violent protests have nothing to do with protesting the film; they only want to upset stability and stir unrest.” He had earlier called for a “right response” towards the same film, in a message he tweeted before the protests at the United States embassy in Cairo started. Bakkar, who joined the protests on Wednesday and was one of its leading forces, tweeted that the Al-Nour party had quit the peaceful protest Tuesday night at 8 pm. Bakkar had also filed a report to the public prosecutor on Thursday requesting that the nationality of any Egyptian who insults any prophet be revoked.

The terrorist organization Al-Qaeda in the Arabian Peninsula (AQAP) called the film another chapter in the “crusaders war” against Islam, encouraging all Muslims to follow the footsteps of the Libyans and kill them, in a move to encourage all US embassies to leave Muslim countries, according to Reuters.

The UN Secretary General, Ban Ki-moon’s spokesperson said on Friday that while the movie is “hateful and appears to have been designed to sow bigotry and bloodshed” he called for calm and restraint and said that it is the time for “dialogue, mutual respect, and understanding.”

UN High Commissioner for Human Rights, Navi Pillay, similarly spoke out against the movie saying “The film is malicious and deliberately provocative and portrays a disgracefully distorted image of Muslims. I fully understand why people wish to protest strongly against it, and it is their right to do so peacefully.”  Yet, he also denounced the violence which erupted as a public reaction to the movie.

Regarding the attack on the US embassy in Egypt, US President Barak Obama’s presidential contender Mitt Romney went as far as threatening to withdraw the 1.3 billion US dollars of annual military aid the US provides Egypt with, when he said on Friday that Egypt needs to ensure the security of foreign diplomats or risk losing aid, according to Reuters.

In Iran, the supreme leader Ayatollah Seyed Ali Khamenei released a statement on Thursday, blaming the Americans and the Zionists for the film.

“The filthy hand of the enemies of Islam once again revealed its deep-rooted malice by insulting the Grand Prophet [Mohammad] (PBUH) and with an insane and deplorable measure showed the fury of the evil Zionists at the daily-increasing radiance of Islam and Holy Qur’an in the present world.” Iranian state-owned news agency FARS quoted him as saying.

Earlier last week, on Wednesday, President Obama and Secretary of State Hillary Clinton were among the first to speak of about the events. They condemned the “outrageous and shocking” attack on the US Consulate in Benghazi that led to the death of the US ambassador Christopher Steve and three others.

Obama and Clinton both denounced the violence, but stressed that the bond with the Libyan government will not be affected.  Clinton added the necessity of remaining “clear-eyed even in our grief. … This was an attack by a small and savage group, not the people or government of Libya.”

Obama told CBS that although the US believes in the first amendment of the constitution, which ensures the right to exercise freedom of speech and freedom of the press within the US, “this film is not representative of who we are, and our values, and I think it is important for us to communicate that.”