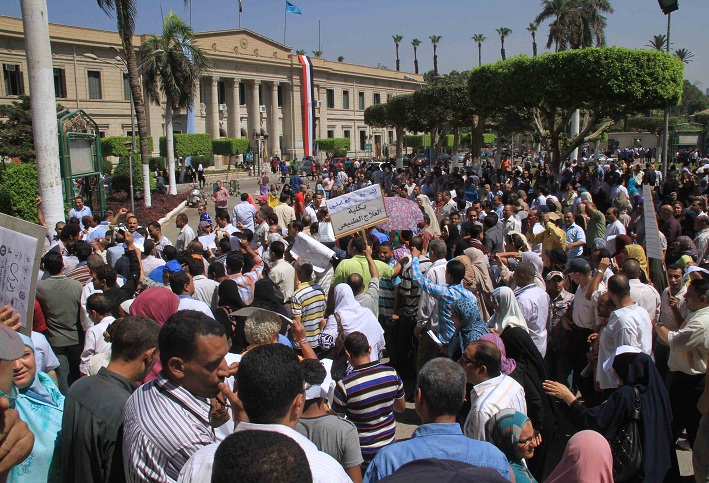 The striking staff published a set of demands on the website of the Egyptian Trotskyist organisation, the Revolutionary Socialists. The list included the right to participate in the elections to pick deans and the head of the university, as well as increasing bonuses and rewards. They also demanded representation on university boards. The Revolutionary Socialists movement has supported the strike since it started, inviting students to do the same.

Hossam Ahmed, a Revolutionary Socialist at Cairo University on Sunday said “I don’t think they won’t respond to the demands. I think that they start talking with the staff to meet some of their demands.”

Ahmed said that on the level of the whole university, at least 1,500 staff members joined the strike.  Professor Hanan Gunied, the general coordinator of the English Section in the Faculty of Mass Communication in Cairo University said that “the workers feel that they have been treated unfairly and unjustly and they want raises like many other sectors in the country who got raises after they protested.”

Gunied explained that the university work is divided into academic and administrative and that the staff in the administrative sector carry a very big load, “we are not saying that they should be treated as equals but….they have the right to get a gradual raise like many other sectors in the country.” University professors have just recently had their salaries doubled.

However, Gunied said that the workers picked the wrong timing and that they should not have held a full strike. She added that the strike has disrupted work in the university. “It should have been a partial strike….today, I held a meeting as the general coordinator of the English section and we managed to carry out the academic tasks but we were not able to carry out all of the administrative tasks and many students had paperwork to get done but they couldn’t,” she explained.  Gunied said that while the university faculty sympathise with the staff, the students should not have to bear the faults of the strike.

Teachers across the country including Alexandria, Dakahalia, and Suez remain on strike as they demand better working conditions. The strike which they had started last week, was supported by the Revolutionary Socialist students.

Land transport workers have also attempted to strike demanding better working conditions.  A representative of the presidency asked the workers to postpone it until their demands are studied.