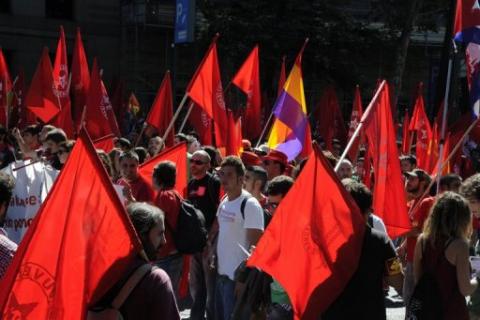 Mass protests in Spain and Portugal, against ever tougher austerity measures, have ramped up the pressure on Iberian governments struggling to avoid international bailouts.

Tens of thousands of chanting protesters from across Spain packed the centre of Madrid on Saturday, including policemen in blue T-shirts, firemen with their red helmets, teachers decked out in matching green, healthcare workers in white and parents pushing strollers.

Many blew whistles and chanted “we are not paying for this crisis” and “general strike now” as they marched to the Plaza Colon square for the rally.

Meanwhile over 100,000 people took to the streets of Lisbon and other Portuguese cities to protest against fresh austerity measures recently announced by their centre-right government.

Organisers estimated that 50,000 people turned out in Lisbon, with a similar number in the second-largest city of Porto and several thousands in around 30 other cities. The country’s police generally refuse to release numbers.

In the Portuguese capital, protesters clashed with police in front of the parliament, but no one was injured.

In Madrid, over 1,000 buses ferried people in for the protest, which was organised by Spain’s two leading trade unions, the CCOO and the UGT, along with roughly 150 smaller organisations.

The government said around 65,000 people took part in the demonstration.

“We want to say loud and clear to the government that we do not agree, that its policies cause too much damage, that we will not resign ourselves because there are alternatives,” CCOO head Ignacio Toxo told the rally.

The government’s austerity measures also include an increase in sales tax and cuts to jobless benefits in a nation with nearly 25 percent unemployment.

“I see the future as very black,” said 55-year-old public sector worker Rian de los Rios as she made her way to the rally.

The Madrid government argues the austerity measures will prevent Spain from needing the kind of multi-billion-euro bailout like the ones already received by Portugal, Greece, Ireland, which come with detailed conditions and regular inspections.

“These sacrifices are absolutely unavoidable if we are to correct the difficult economic climate we are experiencing and lay the foundations for a recovery,” Spanish Economy Minister Luis de Guindos told reporters in Cyprus.

Madrid has already accepted a eurozone rescue loan of up to 100 billion euros to save its banks, still reeling from a 2008 property market crash.

The protesters demanded a referendum on the deficit-reduction strategy of cost-cutting and tax hikes put in place by the government since it took office in December.

UGT head Candido Mendez said Saturday’s rally was the start of a “long fight” against the austerity measures.

Railway workers, along with metro workers in Madrid and Barcelona, will stage a one-day strike on Monday over the austerity measures.

The marchers in Lisbon held up banners reading “Stop social terrorism” and “Soon the State will steal from the dead.”

Another slogan, “Let the troika go to the devil,” made reference to the country’s international creditors — the so-called troika of the European Union, the International Monetary Fund and the European Central Bank.

The global economic institutions are monitoring Portugal’s implementation of spending cuts and reforms required in return for the 78-billion-euro ($102 billion) rescue package the country received in 2011.

These cuts and reforms caused the economy to contract by 1.2 percent in the second quarter, faster than the 0.1 percent rate at the beginning of the year, with the drop for the whole year expected to hit 3.0 percent.

In response, Portuguese Prime Minister Pedro Passos Coelho announced a rise in social security contributions for public and private sector workers together with cuts in employers’ contributions in a bid to kickstart job creation, with unemployment running at more than 15 percent.

On Tuesday, Portugal won a reprieve from its creditors, when the EU and IMF agreed to relax Portugal’s deficit targets for 2012 and 2013, rewarding the Portuguese for pushing through reforms.