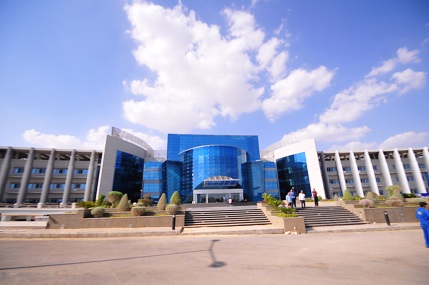 Tens of Nile University students blocked the entrance to the university on Sunday, stopping staff of Zuweil City from entering the buildings which both universities are claiming. A professor at Zuweil City, Yehia Ismail, filed a complaint against the striking students, which led to the arrival of the police.

The students, who are striking against the government’s decision to take away the university buildings and give them instead to the Zuweil City for Science and Technology, announced that their strike is ongoing. The decision comes despite a statement by a cabinet committee formed by prime minister Hesham Qandil offering a solution to the problem.

“We shall go forward with our strike, even after the beginning of the new annual year” Heba Shalaby, one striking student at Nile University, told the Daily News Egypt. “We might hold some of the lectures within the strike.”

The committee had recommended that Nile University would use the buildings and laboratories of the Educational City in 6th of October while the Zuweil City would be allowed to use the disputed Nile University buildings, both for one year in exchange for paid benefit, until Nile University becomes a civil university and until the law authorising Zuweil City is issued, according to state-owned Al-Ahram.

“We don’t even know what’s taking them so long to change us to a civil university instead of a private-owned one” Shalaby, said. “As for using the Education City buildings, we must clarify that those buildings are not equipped to meet our scientific and laboratory needs. It is a city which had been established for hosting school students, not scientific university studies.”

Moreover, Shalaby pointed to the fact that the statement the committee released included a lot of misinformation.

The statement mentioned that the university was established in 2006 as a private-owned university following a presidential decree via the former prime minister under Mubarak, Ahmed Nazif. After the January 25 revolution, nevertheless, the university’s board of trustees waived the right of use of land, buildings and equipment for the ministry of communications, which then gave Zuweil City the right to use the disputed lands.

“The statement failed to mention that the waiver was an illegal one,” Shalaby said, “since it was done over the phone and not documented.”

Moreover, Shalaby described the statement of being generally biased towards Zuweil City.

“The statement puts the number of Nile University students at 88, while that is in fact only the number of undergraduates; there are almost 400 students doing post graduate studies.”

“This is another lie” Shalaby said. “We use the buildings for courses given by professors arriving from abroad as well as conferences. Zuweil only bought a few equipments and furnished the buildings with them recently.”

“What is happening is a slow death for Nile University” Shalaby declared, adding that the strikers want both projects, Nile University as well as Zuweil City, to resume for the well-being of scientific research in Egypt.

“We ask Morsy either to close down Nile University altogether instead of the empty slogans, or to find us a good solution.”

The solution Shalaby proposed was to give Nile University one building and offer Zuweil the other until a new building for Zuweil city is established.