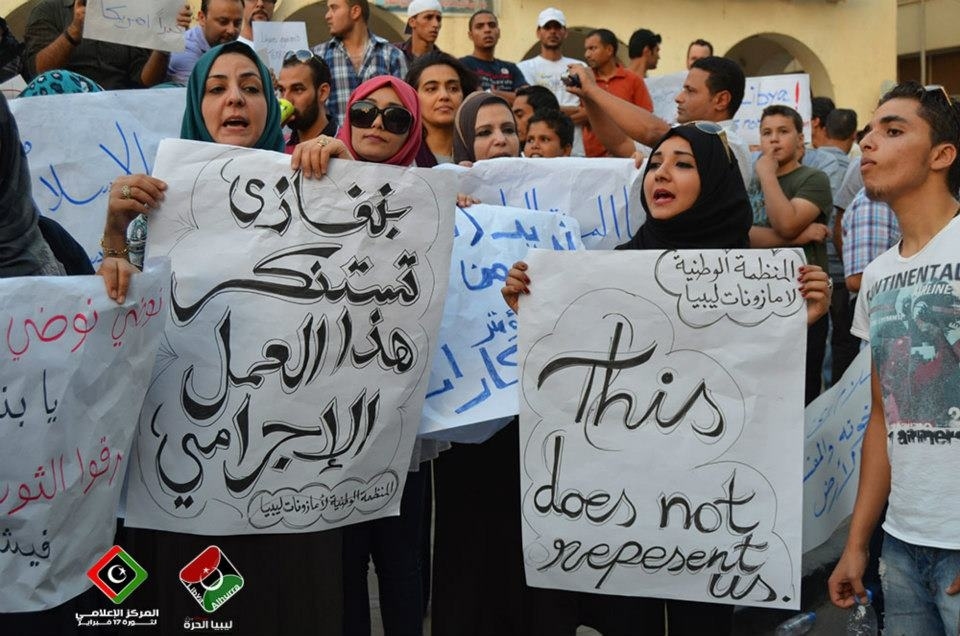 In Libya the tragic death of US Ambassador, Christopher Stevens, together with three Americans and 12 Libyans following a rabid mob attack on the US embassy in Benghazi, in response to an obscure film offending Prophet Muhammad, left many in shock.

As protests, fueled by anger and religious zealotry, escalated, activists trying to voice reason formed a peaceful demonstration for the third consecutive day on Saturday, in Benghazi and Tripoli. Hundreds of protesters, men and women alike, held banners apologizing to the United States and denouncing the attack.

Zuhair, a Libyan activist in Tripoli, said that everyone participating seemed ashamed of what happened and angry.  Tahir, another participant, said that the shame came from “killing a guest” meaning Ambassador Stevens, “everyone was saying how kind and humble he was.”

Another demonstration is scheduled today in an attempt to deliver the message.

In Morocco AFP reported Wednesday afternoon protesters headed to the US embassy in Casablanca to express their anger at the film. Many shouted slurs against Obama and the USA, but no violence ensued. On social networks a photo of young men praying by the US embassy in Casablanca surfaced under calls for civility in protesting, praised by many. Others advocated prayers as a method of protestation.

Meanwhile in Britain an Islamic NGO Discover Islam UK decided that the best response to the offensive movie is to let people know more about Prophet Muhammad.

“Discover UK was established in 2008,” said Walid Mustafa Kamel, PR Manager for the NGO, “with the aim of introducing spreading information on Islam.” Discover Islam UK arranged visit to schools, universities among other places. The NGO aims at answers people questions about Islam and prophet Muhammad’s message.

The campaign on prophet Muhammad, that includes his bio and a pictorial pocket book showing places of importance in his journey, started with the Olympic games in London 2012. “We answer people questions, Muslims and non-Muslims,” explains Kamel, “those who want to know.” The campaign was already in motion when the offensive film came out. “It is insulting. But the best response is not to swear at those who made, better yet spread word about the prophet instead.”

Kamel added what was happening in Libya and Egypt sends a negative image about Islam in general. He said that the foreigners are guests who should be protected and treated as such.