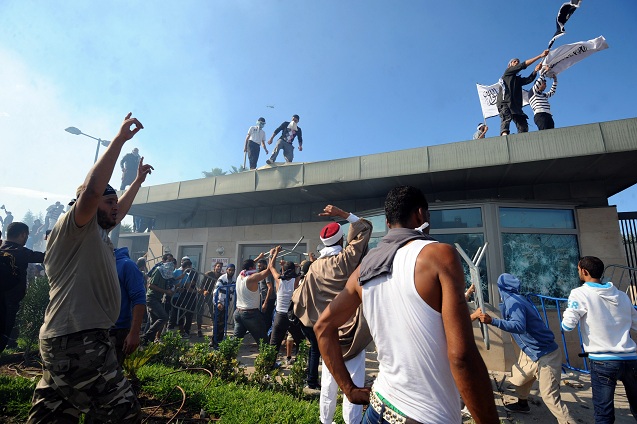 The US State Department called for the withdrawal of non-essential staff from its missions in Sudan and Tunisia on Sunday, directing them to leave the two countries with their families.

“Given the security situation in Tunis and Khartoum, the State Department has ordered the departure of all family members and non-emergency personnel from both posts, and issued parallel travel warnings to American citizens,” said State Department spokeswoman, Victora  Nuland, on Saturday.

The US government also issued travel warnings to US citizens for both Tunisia and Sudan.

“While the Government of Sudan has taken some steps to limit the activities of terrorist groups, elements of these groups remain in Sudan and have threatened to attack Western interests,” read the warning issued concerning Sudan. The US government also announced it would require its personnel to travel in armoured vehicles for official business, and obtain permission to travel outside of Khartoum.

The German embassy in Khartoum, which was stormed in the wake of protests, announced on Sunday it would operate with a reduced staff as well.

The United States announced its intentions to deploy Fleet Antiterrorism Security Teams (FAST) to Sudan and Yemen. The elite Marine teams were deployed to provide additional security to the consulate in Benghazi. However, Sudan rejected the call for the FAST team deployment in Khartoum, as Sudanese Foreign Minister Ali Karti said that his government would be capable of “protecting its guests in diplomatic representations,” according to state-owned news agency, SUNA.

The Yemeni parliament similarly rejected a FAST team deployment in a statement, rejecting the presence of foreign troops, claiming it was the host government’s job to provide security for embassies and consulates. Although no deaths were reported in attacks in Yemen, concerns over the strength of Al-Qaeda in the country have risen in relation to the future security of diplomatic workers.

“Whoever comes across America’s ambassadors or emissaries should follow the example of Omar Al-Mukhtar’s descendants [Libyans], who killed the American ambassador,” said the Yemen-based Al-Qaeda organisation according to Reuters, “Let the step of kicking out the embassies be a step towards liberating Muslim countries from American hegemony.”

The US embassy in Yemen released a statement on Sunday announcing it would close all consular services until 29 September in anticipation of further protesting that would leave staff members vulnerable.

In Libya, FBI investigators who were scheduled to arrive to Benghazi on Saturday delayed the visit, pending the development of safer conditions on the ground. The investigators have already conducted interviews with evacuated eyewitnesses of the attack that killed 14, including the ambassador.

Libyan government officials have maintained the assault was planned by militants in an effort to strain Libya-US relations. Security officials have identified 50 individuals allegedly involved in the attack and have arrested four, but have not disclosed the identities of those detained.