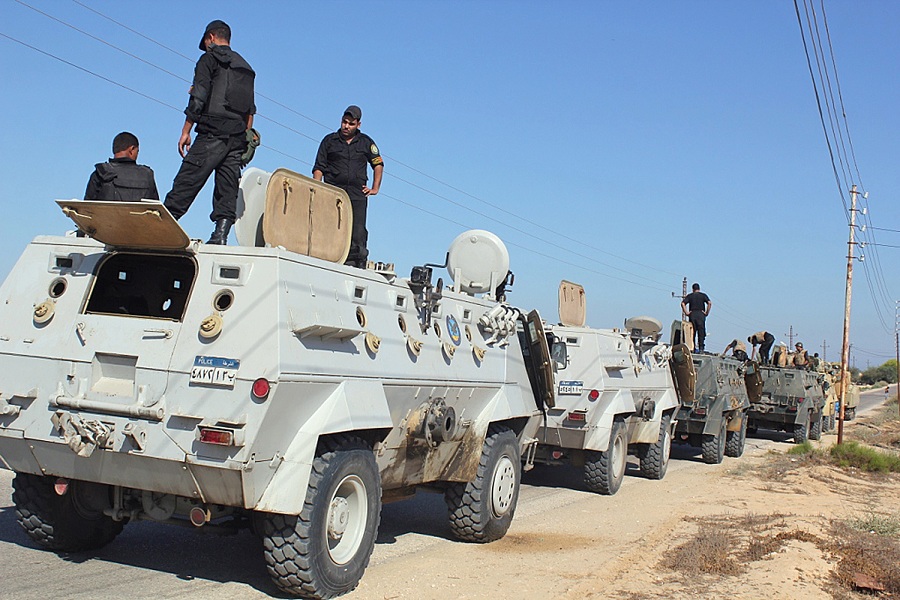 Militants attacked a security headquarters in the Sinai town of Al-Arish at the weekend while fighting also broke out in other areas on the peninsula.

The attackers assaulted the compound, which is filled with security officers and police, with heavy arms, including rocket propelled grenades and automatic rifles, AFP reported.

“They positioned themselves on the roofs of buildings opposite the security headquarters and launched the RPGs,” an official told AFP.

“It seems they set off an explosive device at the security headquarters first before using the RPGs,” the official said.

The fighting stopped after the militants fled.

Ammar Shalabi, the spokesman for 6 April in the Sinai, said there were no fatalities in the attack and that none of the militants were apprehended.

Shalabi said clashes also broke out between protesters and police in Sheikh Zuwayyid throughout the weekend.

Beginning on Friday, crowds marched to protest the Multinational Force & Observers (MFO) in response to an internet video that derides the Prophet Muhammad and has elicited protests around the world. The MFO is a force based in the Sinai and charged with maintaining the peace agreement between Egypt and Israel that was reached in 1979.

As the crowds built up at Sheikh Zuwayyid’s three checkpoints at Al-Moqata, Guri, and Al-Reyasa, street battles began to take place.

Starting on Saturday, many of the protestors brought weapons to engage the police.

“From Reyasa checkpoint to Shabanah, there has been a lot of instability, a lot of battles going on in addition to these last three days of chaos,” Shalabi said.

Three policemen as well as a woman and a child were wounded in Sheikh Zuwayyid, AFP said. Eight people were also arrested.

The MFO consists of 12 different countries and over 1,600 personelle. In the area near Sheikh Zuwayyid the MFO monitors the Egyptian Border Guard Force and makes sure that its makeup remains inline with the peace agreement.

After a Ramadan attack by militants that claimed the life of 16 Egyptian soldiers, the Egyptian military flooded the Sinai as part of “Operation Eagle,” in order to bring justice to rouge militias allegedly behind the attack.

Last week armed forces spokesperson Colonel Ahmed Mohamed Ali, said that the operation has yielded the deaths of 32 “criminal elements”. A total of 38 suspects were also arrested though 22 were released for lack of evidence.
Despite the military’s offensive, militants have brazenly taken the battle to the doorsteps of state security forces, with Sunday’s attacks coming in broad daylight.

The Sinai is heavily militarized with checkpoints and army bases dotting the desert highways. The identification of travelers is frequently checked by security personnel, buses are emptied on the side of the road and searched, and foreign travelers are no longer allowed to enter the road that stretches from Suez in the west to Taba in the east.