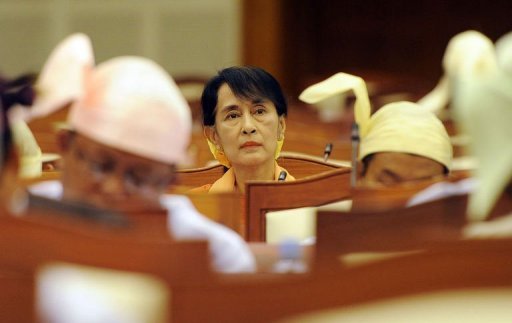 Aung San Suu Kyi, chairperson of the Myanmar opposition, the National League for Democracy, arrived in the United States for a 17-day tour starting Monday, in the hope of getting the US government to ease the import ban on her country, recently renewed by the Congress.

Sanctions were applied because of lack of democracy in Myanmar and the imprisonment of more than 400 political activists, 56 of whom were released but denied passports and banned from continuing with their education.

Even though Congress ruled to renew the sanctions for another year, the Obama Administration has been discussing recently easing them, as a reward for Myanmar’s progress towards democracy.

“We don’t want to say whether the US should maintain the import ban or not” Suu Kyi’s party official spokesman, Nyan Win, said ahead of her visit, according to AP. “I understand the US is keeping the import ban because they want to keep a watch on the country’s political and economic reform and I think the US should continue to observe the situation.”

Her visit will include meetings at the State Department and the White House and she will be presented with Congress’s highest award for her journey from political prisoner to spreader of democracy.

Joe Crowley, one of the lawmakers who sponsored her 2008 award of the Congressional Gold Medal also told The Guardian “The idea that she will be at the Rotunda of the US Capitol, to receive the highest award Congress can give, just a couple of years after she was under house arrest in her own country, is just remarkable.”

The Nobel Peace Prize winner, Aung San Suu Kyi, was placed under house arrest for 15 years throughout her career, for promoting democracy and free speech in Myanmar.