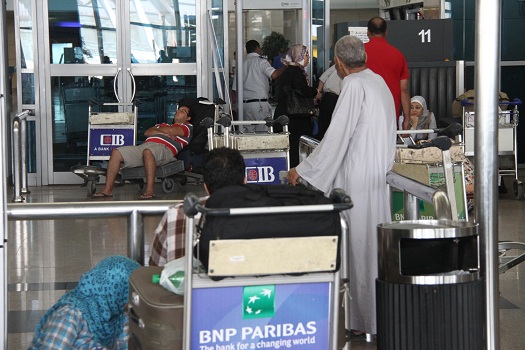 “Operating the flight route to Cairo and maintaining the necessary infrastructure for that requires a large amount of security and operational resources,” according to a letter from the El Al CEO to the Israeli foreign minister, as translated by US news website, CBS news. CBS added flights have emptied since the 2011 25 January Egyptian revolution.

El Al has one flight a month to Egypt. An employee told the Daily News Egypt they have not heard about cancellations and there is still a flight scheduled to Cairo in their system for 18 November.

The importance of El Al flights goes beyond economics. The 1979 peace agreement between Egypt and Israel mandated normalized civilian flights. According to article six “as soon as possible and not later than six months after the completion of the interim withdrawal, the Parties shall enter into negotiations for the purpose of concluding a civil aviation agreement.”

This was followed by the 1980 Air Transport Agreement, “establishing regular air services between the respective territories.”

The relationship between the two countries, never exceptionally warm, has cooled since 2011. Following the revolution, a Muslim Brotherhood-affiliated president of Egypt was elected and the Islamic group, historically hostile to Israel, also gained a majority in parliament.

This weekend the border crossing from Taba, Egypt, to Eilat, Israel, was empty. The Egyptian security officer was not even at his window to check passports. On the Israeli side, young soldiers read magasines and took breaks at patio tables overlooking the Red Sea, waiting for travelers who never came.