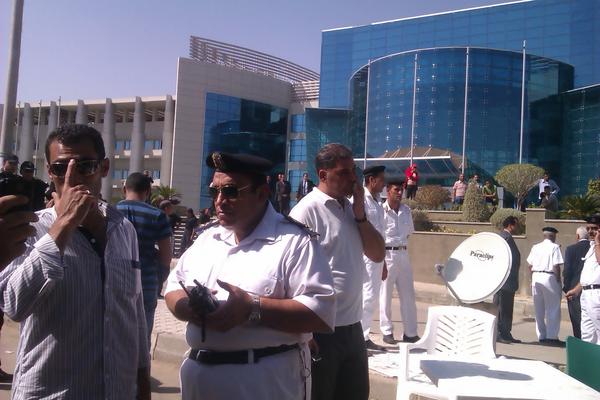 On its 21st day, five participants in the Nile University sit-in were arrested and others were forcibly and violently removed, as police cleared the campus of protesters on Monday.

“They beat us up. We were pulled out,” Heba Shalaby, protester and student at Nile University, said.

Another protester and Nile University student, Mariam Ibrahim, said protesters were sitting inside the University campus when they saw ten state security cars arriving, with the Giza security director among them.

“They entered with guns and batons, accompanied by their own thugs dressed in civilian clothes,” Ibrahim said. According to her, security forces blocked the entrances and exits to the university.

“We had some law students among us with whom the forces were negotiating about attacking the sit-in,” Ibrahim said. “Though they explained to them that they didn’t possess the legal documents authorising their clearance of the sit-in, the head of the court ordered them over the phone to clear it regardless.”

It was then that some of the “thugs” broke into the sit-in and “kidnapped” the five arrested protesters, according to Ibrahim.

Next, they started negotiating with the protesting girls, asking them to leave the campus in exchange for releasing the “kidnapped” protesters.

Before the sit-in was entirely cleared, Shalaby told Daily News Egypt, “female police forces are trying to move us out of the campus but we are staying here. If we leave the campus, it would be done against our will.”

According to Shalaby, the security forces had promised the protesters that they would not touch them nor exercise violence against them.

When negotiations failed, families of the protesters were allowed inside the campus to convince them to leave. When that final attempt also failed, Ibrahim said security forces dragged the girls from the campus.

“We were monstrously and filthily beaten up,” Ibrahim said. “The violence was indescribable.”

Emad Mubarak, executive director of the Association for Freedom of Thought and Expression (AFTE), confirmed the protesters’ arrest. AFTE, alongside the Arabic Network for Human Rights Information (ANHRI), is closely following the Nile University situation and providing those arrested with legal advocacy.

Members of the sit-in arrested include the head of the light current department Mahmoud Gabr and four Nile University students; head of the student union Mustafa Sham’a, Muhammed Ossama, Hesham Hussein Riad, and Muhammed Tarek Al-Shishtawy, according to Mubarak.

“They were taken to Sheikh Zayed police department,” Fatma Serag Al-Deen, AFTE lawyer advocating the Nile University detainees, said. She also added that Mahmoud Gabr told her police had beaten them before arresting them.

For his part, Zuweil denied having anything to do with the committee’s final decision on the matter through his twitter account. “The public prosecutor had issued a decision on 1 September demanding the extradition of the Nile University students from the campus, yet we waited until the decision of the committee was out,” Zuweil said. “Nevertheless I have repeatedly and until this moment recommended against the use of violent with the students.”

The sit-in, ongoing since early September against the government’s decision to appropriate university buildings and give them to the Zuweil City for Science and Technology, became tense following the solution offered by a cabinet committee formed by Prime Minister Hesham Qandil in a statement they released on Saturday.

The committee had recommended that Nile University could use the buildings and laboratories of the Educational City in 6th of October while the Zuweil City would be allowed to use the disputed Nile University buildings, for one year in exchange for paid benefits, until Nile University becomes a civil university and until the law authorising Zuweil City is issued, according to state-owned Al-Ahram.