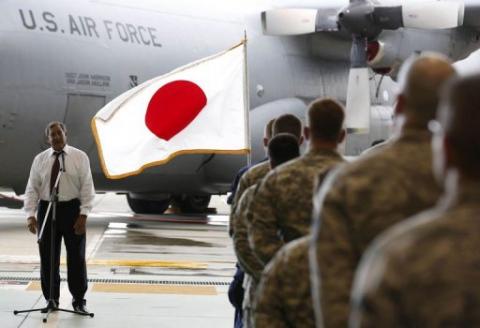 US Defence Secretary Leon Panetta called for diplomatic efforts to resolve a worsening territorial spat between Japan and China on Monday, the day after warning disputes could draw East Asia into war.

Speaking after meetings in Tokyo with senior Japanese figures, Panetta urged “calm and restraint on all sides” in a row over disputed islands that has rapidly escalated in the last week into sometimes violent protests in China.

“Obviously we’re concerned by the demonstrations and the conflict over the Senkaku islands,” Panetta said, referring to the Japanese-administered archipelago that China claims and calls Diaoyu.

“It is extremely important that diplomatic means on both sides be used to try to constructively resolve these issues,” he said, adding a resolution of the dispute has to be based on “clear principles” and international law.

“It’s in everybody’s interest for Japan and China to maintain good relations and to find a way to avoid further escalation,” said Panetta, pounding the podium for emphasis.

Panetta arrived in Tokyo on Sunday evening after days of anti-Japanese protests had rocked cities across China, with diplomatic missions being targeted in some instances.

Speaking to reporters travelling on his plane, Panetta said intemperate actions over the disputed East China Sea islands could have serious consequences.

“And that conflict would then have the potential of expanding.”

Japan and China, Asia’s two largest economies, have long been at loggerheads over the island chain, but tensions have spiked recently.

Last week, Japan announced it had nationalised three of the islands, triggering an angry reaction in China. Tokyo already owns another and leases the fifth.

The uninhabited islands lie along important shipping lanes and the seabed nearby is thought to harbour valuable mineral resources.

Panetta said Monday the US commitment to Japan, in the form of a mutual defence treaty, was unwavering.

“Obviously we stand by our treaty obligations. They are longstanding, and that does not change.”

The US has around 47,000 troops stationed in Japan.

But he said the United States as a matter of policy does not take a position on the territorial dispute.

Panetta’s week-long Asian tour includes visits to Beijing and Auckland but his schedule originally did not include a stop in Tokyo. The row over the islands likely prompted the change in his itinerary, analysts said.

Japanese Foreign Minister Koichiro Gemba, who met with the former CIA chief earlier in the day, called on Beijing to dial down the temperature on the dispute.

“Anti-Japan demonstrations are spreading on a scale never seen before. Some of them have turned into riots. It is truly regrettable that Japanese businesses have suffered significant damage,” he said.

Reports Monday suggested Japanese firms were curtailing their operations in China after factories there were targeted.

“I will again ask the Chinese government to take appropriate measures. I hope law and order will be respected,” the foreign minister said.

Gemba said he told Panetta that Japan was seeking to keep a lid on the row.

“We have agreed that Japan and the United States will cooperate to ensure that Japan-China relations will not be seriously harmed,” he added.

An editorial in the People’s Daily — the mouthpiece of the Communist Party — on Monday hinted at possible sanctions on Japan over the dispute.

Acknowledging sanctions would be a “double-edged sword” for China, the paper said Japan could be set back up to 20 years if Beijing chose to make its fourth-largest trading partner suffer.

“Amidst a struggle that touches on territorial sovereignty, if Japan continues its provocations China will inevitably take on the fight,” it said.

Japan is a big investor in China, with two-way trade worth $342.9 billion last year, according to Chinese official data.