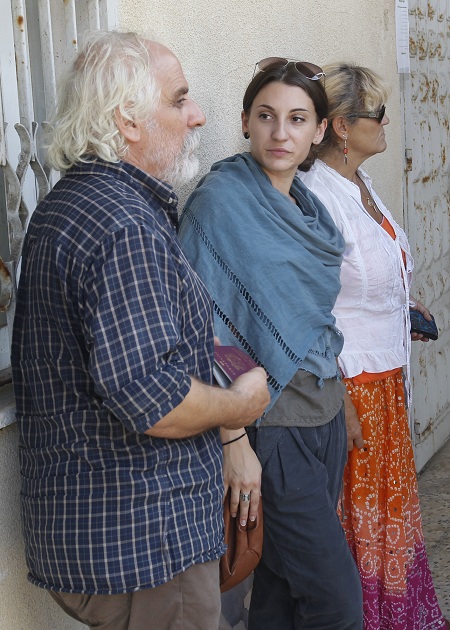 Four men were sentenced to prison on Monday for the murder of Italian pro-Palestine pacifist and activist Vittorio Arrigoni who was murdered in the Gaza Strip where he assisted Palestinians living under siege.

Arrigoni’s family was represented by lawyers from the Palestinian Centre for Human Rights (PCHR), who had attended the hearings at the Gaza Permanent Military Court and which released a statement on the verdict on Monday. The human rights centre said two men were sentenced to life in prison with hard labour for premeditated murder and kidnapping for the purpose of murder.

The statement added that a third man was convicted and sentenced to ten years with hard labour while a fourth man, who provided the apartment in which the murder took place, was sentenced to a year in prison for harbouring fugitives. The men were not given the death sentence upon requests to the court from Arrigoni’s family, who wanted a fair trial but not capital punishment.

In regards to the statement, PCHR said it, “like the Arrigoni family, is satisfied by the sentences issued by the court, which can be described, under the circumstances surrounding the case, as fair and legitimate, and considers that the murderers of Arrigoni have been effectively tried.”

The group added that it has followed Arrigoni’s case out of “honour for his soul” and out of a moral commitment to international activists who have lost their lives defending the rights of the people of Palestine like Arrigoni and Rachel Corrie, an American activist who was crushed to death by an Israeli Defence Force bulldozer.

Arrigoni was murdered in April 2011 at the hands of a Jihadist group that abducted Arrigoni in an attempt to force Hamas to release one of its members. According to Reuters, the group is a rival of Hamas, which has controlled Gaza since 2007. The group demanded the release of Sheikh Hisham Sa’idni by the Hamas government but Arrigoni was murdered before the deadline they gave passed, Ma’an, an independent Palestinian news agency, said.

He had come to Gaza as part of the Free Gaza mission in August 2008, on one of the few boats that managed to enter Gaza through the Port of Gaza in defiance of the Israeli maritime blockade of Gaza. An activist with the International Solidarity Movement, in which Corrie was also an activist, he remained in Gaza for over three years, through “Operation Cast Lead,” which Israel waged on the besieged strip in December 2008 and January 2009, leaving over 1,300 Palestinians dead.

Arrigoni descriped the incursion in vivid accounts published in an Italian newspaper. His writings were later compiled in a book, Gaza: Stay Human.  He ended every entry with the words “stay human” which he described as an “invitation … to desist from the commission of criminal acts.”