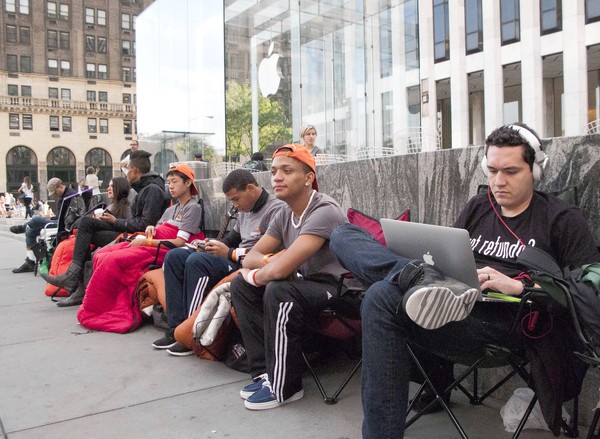 NEW YORK (AFP) – Apple received more than two million orders for its new iPhone 5 in just 24 hours, the company said, pushing back many deliveries into October because of unprecedented demand.

“iPhone 5 pre-orders have shattered the previous record held by iPhone 4S and the customer response to iPhone 5 has been phenomenal,” said Philip Schiller, Apple’s senior vice president of worldwide marketing, on Monday.

Apple unveiled the new version of its iconic smartphone last Wednesday and opened up pre-orders on Friday. The company said the hot item would be available in 100 countries around the world by year’s end.

The first customers in the United States and several other countries are expected to get the device September 21, but Apple said some would have to wait.

“Demand for iPhone 5 exceeds the initial supply and while the majority of pre-orders will be delivered to customers on September 21, many are scheduled to be delivered in October,” an Apple statement said.

Apple’s US website said orders placed would be shipped in two to three weeks.

The iPhone 5 will be available from the Apple Online Store and its retail outlets, and for US customers through AT&T, Sprint, Verizon Wireless, Best Buy, RadioShack, Target and Walmart stores and other resellers.

AT&T said in a statement it set a sales record with iPhone 5 over the weekend, making it the fastest-selling iPhone the company has ever offered, but gave no specific numbers.

The carrier said it will be selling the iPhone 5 in AT&T retail stores on Friday.

In New York, a handful of people were already camped outside the Apple store on Fifth Avenue awaiting the new smartphone, but all were sponsored by companies or apps seeking publicity.

First in line was a man identifying himself as Sagitarius Catharsis, equipped with a chair, small table and blanket, who said he was promoting a local chat service called App Vibe.

Also in the queue was Keenen Thompson, 22, who said he works in “fashion” and was sponsored by Gazelle, a company which buys old phones and old computers in trade-ins.

“We already waited 18 days for iPhone 4S last year,” he told AFP. “We decided to do it again. There’s no fun in ordering it on Internet. Here people pass by and talk.”

Joshua Chinchilla, 23, an account manager for the mobile banking app Refundo, said he and a colleague plan to be among the first to get the new iPhone early Friday.

He said his company is providing chairs, and sweaters and that “tomorrow there will be thunderstorms, hopefully we’ll get umbrellas too.”

Some analysts say Apple could sell 10 million in the opening days and 50 million before the end of 2012.

Apple shares extended their rally Monday, gaining 1.2 percent to end at a new record $699.80, giving the world’s most valuable firm a market worth of $654 billion. In after-hours trading, shares edged above $700.

Many analysts remained bullish on Apple because of the iPhone and other products, including a rumored new mini-iPadexpected to be launched later this year.

“We reiterate our buy rating and $797 price target.”

Ben Reitzes at Barclays commented: “The pace of this iPhone 5 roll-out is the fastest in the iPhone’s history and points to a big December quarter.”

Reitzes said the only thing holding Apple back is the possibility of “significant production constraints,” but added this would push “a significant amount of units into the December and March quarters.”

The thinner, lighter, more powerful iPhone has been among the most keenly anticipated products in the tech world.

Made of glass and aluminum, it features a new design to nestle in one’s palm to naturally align with thumbs and works on the faster mobile Internet networks known as LTE.

The US Federal Trade Commission warned meanwhile that scammers were already seeking to cash in on iPhone mania, with emails offering a chance to get one.

“Don’t reply, and don’t click on links provided in the message,” the FTC said. “Links can install malware on your computer and take you to spoof sites that look real but whose purpose is to steal your information.”