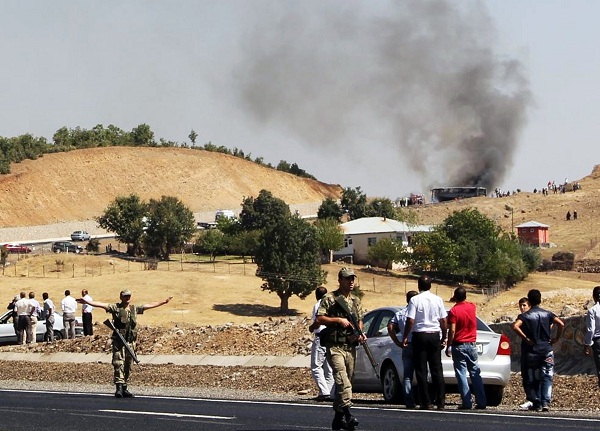 The convoy was struck by a rocket while travelling between Bingol and Musit. According to security sources cited by Reuters, the attack was by the Kurdistan Workers’ Party (PKK), labeled a terrorist organisation by the United States, Turkey, and the European Union.

Since their 1978 inception, the PKK have been at odds with the Turkish government. Over the past two years the conflict has escalated, leaving 700 dead. The International Crisis Group (ICG) reported this as the highest number of casualties in thirteen years.

According to a report published on 11 September by ICG, “prolonged clashes with militants in the south east, kidnappings and attacks on civilians suggest hardliners are gaining the upper hand in the insurgent PKK.”

ICG suggests the government and mainstream media should “resist the impulse to call for all-out anti-terrorist war and focus instead, together with Kurds, on long-term conflict resolution.”

Statistics show Kurds are often the target for government raids, while journalists sympathetic to the Kurdish plight are often arrested and put on trial for supposed links to the PKK.

In their report, ICG stated Turkey needs to “reform oppressive laws that jail legitimate Kurdish politicians and make amends for security forces’ excess,” and called on both sides to make concessions.

From the Kurds, a greater public commitment to realistic political goals must be made, as well as abnegation from the use of terrorist tactics.

To achieve peace, ICG called on Turkey’s politicians to recognise the rights of Kurds including the recognition and teaching of Kurdish, fair political representation, and an end to discriminatory laws. Such measures, according to the report, would sway the public to abandon militant activities and help the government to negotiate disarmament and demobilisation.

In Denmark, eight Kurdish men were arrested on Tuesday near Copenhagen on suspicion of funding the PKK. According to AP, Danish investigator, Jens Moeller Jensen, believes at least $11.8 million has been raised for the PKK by Kurds in Denmark over the past three years, with a total $24.6 million believed to have been shipped in total.

The arrests were part of a Copenhagen City Court investigation accusing Kurdish channel, Roj TV, of inciting terrorism. The courts were apparently unable to revoke their broadcasting licence due to legal technicalities.