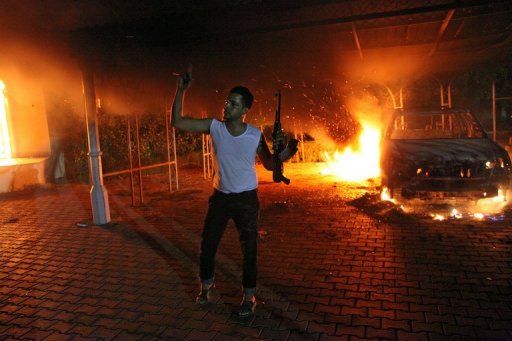 Islamist militias have been able to flourish in Libya since its 2011 uprising, but a deadly attack on Americans in Benghazi has jolted the newly democratic country to finally act against them.

Ansar al-Sharia is among the most prominent of the hardline Islamist groups to have emerged from the power vacuum in Libya since the revolution that toppled and killed dictator Moamer Kadhafi.

It is widely suspected of being behind the assault on the US consulate in the eastern city that killed ambassador Chris Stevens and three other Americans during a protest against an anti-Muslim film last week.

As analyst Jaber al-Obeidi puts it: “All the readings point to them as a primary suspect — their name itself links them to Abu Yahya al-Libi and Al-Qaeda.”

Al-Qaeda welcomed the assault — which erupted on the anniversary of the September 11, 2001 attacks on the United States — as revenge for a drone strike that killed Libi, a Libyan who was the jihadist network’s deputy leader.

And although Ansar al-Sharia’s flag was sighted at the consulate, Fawzi Wanis al-Kadhafi, head of the Benghazi supreme security committee, stressed there is not enough evidence to accuse any specific group.

“Many people angered by the film came, including Ansar al-Sharia,” he said.

There is no shortage of well-armed Islamist brigades in Benghazi, cradle of the 2011 revolt against the Kadhafi regime.

Shield Libya and February 17, both viewed as close to the Muslim Brotherhood, and the jihadist brigade Raf Allah Al-Sehati are the best armed and most well known. All nominally operate under the defence ministry.

Ansar al-Sharia, which has two solid bases in the eastern city, is not.

Yussef al-Gehani, in charge of external relations for Ansar al-Sharia, told AFP that it “did not take part in any act against the embassy.”

But Ansar al-Sharia, which translates as Partisans of Islamic Law, is the name mentioned most often when locals are asked to identify which groups in Benghazi mirror Al-Qaeda’s ideology and tactics.

“We fought against Kadhafi not only because he is Kadhafi but to apply Sharia (Islamic law) in Libya,” said Gehani, 33, an accountant by training.

Gehani insists the group, which formed just a few months ago, has no links to Al-Qaeda and that it turned up at the consulate to help restore order.

Formed in response to insecurity, it is the military arm of Al-Dawa wa Al-Islah, a like-minded charitable organisation with roughly 400 members, Gehani said.

And it has won a degree of legitimacy and popular support by securing two hospitals, Al-Jalaa and Al-Hiwari, at the request of the local council, he added.

They represent the Salafist jihadist strand in Libya which by most accounts is a small minority but best captures the threat of arms meeting ideological zeal.

Gehani says good relations between Tripoli and Washington depend on the “United States not spilling Muslim blood through its actions, as in Afghanistan, or inaction, as in Syria.”

He also cautions against insulting the Prophet Mohammed.

Last week’s deadly assault on the US consulate is the worst in a series of attacks this year in Benghazi focused on diplomatic missions and humanitarian agencies like the United Nations and the Red Cross.

The authorities in the city have proved powerless and brought no one to justice.

They are reticent to acknowledge the threat posed by small but radical groups, preferring to blame remnants of the previous regime instead.

In the case of the consulate attack, Mohammed Taib, security chief at Benghazi council, blames “mistakes” and the toxic marriage of arms and emotions running wild over the American-produced film deemed insulting to Islam.

“It was a peaceful demonstration… that turned into a frontline,” he said.

Mohammed al-Megaryef, the president of the national assembly, has accused Al-Qaeda and foreign actors of being responsible for the deaths of the Americans.

Leaders in Benghazi worry, however, that blaming Al-Qaeda may trigger reprisal US drone attacks against Islamist militants in Libya.

Kadhafi stressed that dealing with extremist groups, which have historically concentrated in the east, requires the use of “personal ties” and influence to avoid plunging the city into conflict.

Mohammed Abu Sedra, a former political prisoner and prominent Islamist negotiator, said he was “contacting different Islamic sects and groups to try to deal with the situation because it is a very serious and dangerous one.”

His concern is the White House might find the arrests of suspects as simply not enough and order strikes against Libya to boost President Barack Obama ahead of the US presidential election.

“If it is Al-Qaeda (behind the attack), that is the beginning,” he said.

“Then American and Western intelligence will have reason to come to Libya. We will always be threatened and maybe we’ll be another Waziristan with drones. Now we can see surveillance drones but maybe next time they’ll be armed.”

Islamists, well represented in the ranks of local brigades, are said to have training camps west of the nearby city of Darna, known as Libya’s “Islamic emirate.”

Most, Abu Sedra maintains, are willing to give the transitional government a chance to produce a constitution based on Islamic law, but there are jihadists like Ansar al-Sharia willing to fight for an Islamic state.

“When the constitution includes Sharia (Islamic law) as a frame of reference, straight and clear, at that time they will be ready to… come under control of the army,” he predicted.

A less optimistic Obeidi urged the government to uproot them.

“If the government doesn’t use power now and show that it is a competent state, then it is condemning itself to failure,” he said.