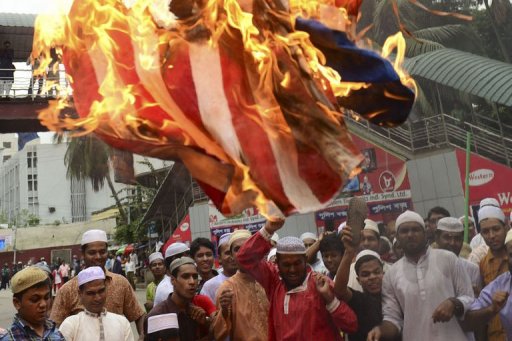 Bangladesh has blocked YouTube after the video-sharing website failed to take down an anti-Islam film that has sparked furious protests across the Muslim world, government officials said Tuesday.

“On Sunday we wrote to (site owner) Google to remove the video clip from YouTube. We told them that it could incite violence, but they have not done so,” he said.

“Yesterday we told our officials to block YouTube. The site has been blocked since Monday night,” he added.

Google, which has barred access to the video in Egypt, India, Indonesia, Libya and Malaysia, was not immediately available for comment.

The film entitled “Innocence of Muslims”, believed to have been produced by a small group of extremist Christians, has sparked a week of furious protests outside US embassies and other American symbols in several countries.

At least 19 people have died in protests against the film including the US ambassador to Libya and three other Americans who were killed in Benghazi when the US consulate came under attack.

Protests reached Muslim-majority Bangladesh last week as thousands of Muslims belonging to Islamist groups burnt US and Israeli flags on Friday and tried to march to the US embassy before they were stopped by police.