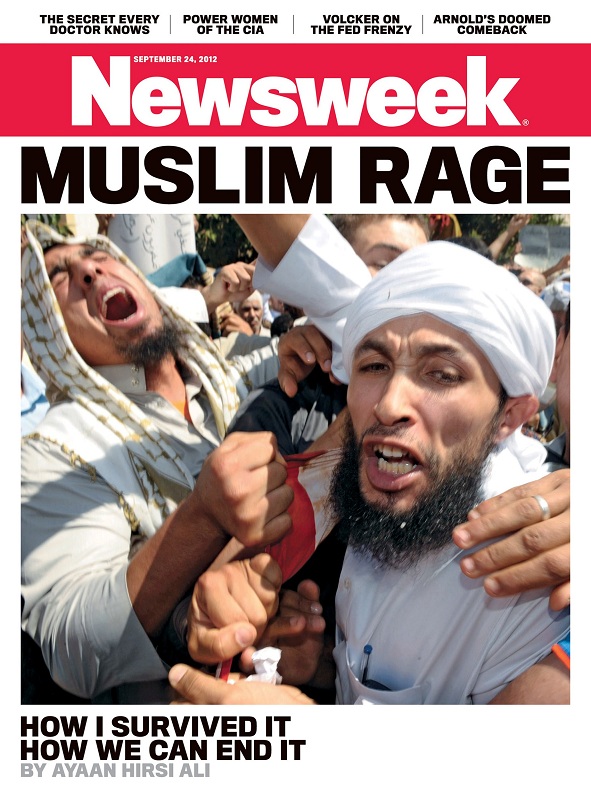 American magazine Newsweek sparked controversy on Monday after the release of its latest issue, the cover of which features two angry bearded men in a large mob. The title for the cover story, “Muslim Rage: How I survived it, how we can end it” is written by controversial Dutch-Somali activist Ayaan Hirshi Ali.

The cover picture and title of the article were immediately received with criticism from Muslims and non-Muslims alike, who pointed at the provocative and crude misrepresentation of Muslims in the Arab World.

On Tuesday, before the cover had been released, Michael Wolff of USA Today criticised Newsweek editor-in-chief Tina Brown of, “hiring big names, courting attention with teasing covers and building her brand through the media itself” to gain readership.

After releasing the cover, Newsweek tweeted, “want to discuss our latest cover? Let’s hear it with the hashtag: #MuslimRage,” in an effort to promote the story.

As a result, the hashtag #MuslimRage became a trending topic on Twitter, with thousands of users using the term to mock the Newsweek cover.

Sarcastic tweets included, “lost your kid Jihad at the airport. Can’t yell for him. #MuslimRage,” and “Orders pancakes… came with a side of bacon #MuslimRage.”

The popular blog Gawker posted a satirical article, “13 powerful images of Muslim rage.” One photo showed a girl on a swing with the caption “a wrathful Jordanian girl,” while another one showed a couple holding hands by the Nile with a caption reading, “irate Egyptians taking a break from their #MuslimRage.”

The lead article by Ali highlights how her life was changed after her role in the making of Submission, a short film released in 2004 that sparked outrage over the way in which it characterised and criticised Islam.

In her piece she related the response of the Muslim community to Submission to Salman Rushdie’s The Satanic Verses and the most recent outrage over Innocence of Muslims, which sparked protests in many countries.

Conservative British newspaper The Telegraph called it “a sickening piece of shock journalism that cheapens a once great magazine.”

Ali’s outspoken criticism of religion has been the subject of praise and criticism. Those who criticise her point to her sweeping generalisations and intentionally provocative approach.

In May the activist gave a speech partially justifying the mass murder committed by Norwegian terrorist Anders Breivik, because his views were “censored.” She is married to British historian Niall Ferguson, who is a contributing columnist to Newsweek and is known for his view that Europe will eventually fall to “the fatal embrace of Islam.”

Newsweek’s most recent cover strikes a resemblance to an issue released by the publication in October 2001, which featured an article by Fareed Zakaria called “Why they hate us: The roots of Islamic rage – and what we can do about it,” with a small child in a turban holding a gun.

The photo was taken at an anti-US rally in Islamabad following the terrorist attacks on 11 September that left roughly 3,000 dead.

Newsweek has a history of controversial and sensationalist cover stories. Most recently Ali’s husband Ferguson wrote the cover story for an August issue called “Hit the road, Barack: Why we need a new president.” He came under heavy fire by many readers including prominent American economist Paul Krugman, who said the piece was filled with distortions and errors.

In August 2011 a Newsweek cover featured congresswoman Michele Bachman staring wide-eyed into the camera, in a photo many pundits said made her look “deranged.” Bachmann consequently denounced the cover photo.

Newsweek reportedly stands by its article. Public relations director at Newsweek and The Daily Beast Andrew Kirk told Politico.com, “this week’s Newsweek cover accurately depict’s the events of the past week as violent protests have erupted in the Middle East.”