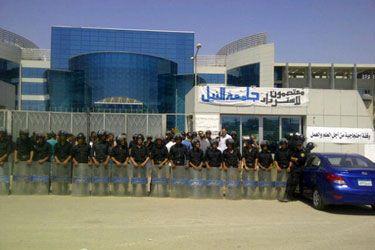 Nile University protesters moved their sit-in off campus after the initial protest was violently cleared by security forces on Monday, according to protesters.

They were joined on Tuesday with members of April 6 movement, Al-Dostor party and Maserel Kaweya party in a protest which included over a hundred demonstrators, according to Heba Shalaby, protester and Nile University student.

“We’re not leaving the sit in,” Shalaby said, in spite of Monday’s security crackdown.

Meanwhile, the five sit-in participants who had been arrested on Monday were released after midnight. “They were transferred to Sheikh Zayed police station where they stayed until 8:30 pm when the investigation started,” the father of Muhammed Ossama, one of the detainees, said, denying that the detainees were ill-treated during their detention.

However he claimed they were violently treated during their arrest, adding that they went to hospital to obtain a medical report documenting their condition at 1 am Tuesday before their release.

The five participants were accused of using violence against the official responsible for carrying out the attorney general’s decision, according to their lawyer Fatma Serag Al-Deen. “We expect the prosecution to refer it to court, since the charges they are facing are not simple,” he said.

“Ossama, Sham’a and Gabr were all wounded,” Serag Al-Deen said, mentioning that the wounds were either bruises or abrasions.

The Ministry of Interior released a statement regarding Monday’s events, saying it was carrying out the decision of the attorney general of the south Giza prosecution, who had decided to hand the disputed piece of land upon which Nile University was built to the head of Zuweil Centre Salah Azzazi. The security forces dealt with the protesters with an utmost level of self-restraint, according to the ministry

Another Nile University protester, Ahmad Khalil, was released on Tuesday. Khalil was arrested on Sunday at the police station where he had gone to file a report against Zuwail city professor Yehia Ismail.

“Khalil was released on EGP 2000 bail,” his lawyer Islam Mohamed said. According to Mohamed, Khalil was among protesters who were blocking the entrances to Nile University on Sunday, denying the entrance of Ismail.

A verbal fracas erupted, which led to Ismail hitting Khalil in the face, according to Mohamed, who said Ismail then fell and cut his hand. Ismail filed a report against Khalil at the Sheikh Zayed police department, accusing him of assault.

“Khalil also went to the police department to file a report against Ismail, only to find himself detained and facing the charge of attacking a public employee while performing his job,” Mohamed said, explaining that the charge is incorrect since the entire incident occurred outside campus, which is outside Ismail’s workplace. “The punishment for such a felony ranges from 24 hours to three years in jail.”

The sit-in has been ongoing since early September against the government’s decision to appropriate university buildings and give them to the Zuweil City for Science and Technology.