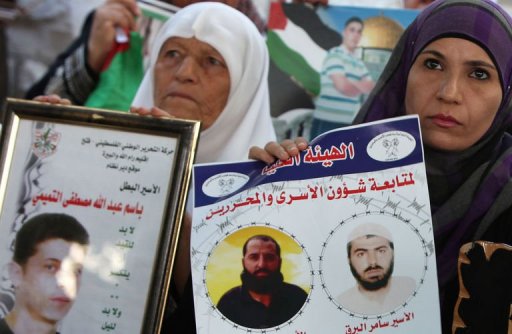 About 200 Palestinians protested outside offices of the Red Crescent near Ramallah on Tuesday, in solidarity with hunger-striking Palestinian prisoners held by Israel.

Four men are currently fasting in a demand to be released from detention without trial.

The Ramallah-based Palestinian Prisoners Club said on Monday that one of them, 38-year-old Samer Barq had been moved to the intensive care unit at Assaf Harofeh medical centre, in central Israel, suffering from a drop in blood sugar.

On Tuesday, the club told AFP that his condition had improved, although officials there did not say whether he was still in intensive care.

They said that Hassan Safdi, who like Barq has been fasting for weeks, was in the same hospital. The other two, Ayman Sharawneh and Samer Assawi, were fasting in prison, they said.

In Israeli-annexed east Jerusalem, dozens of Palestinians also demonstrated outside the Red Cross offices, demanding the release of Assawi, a local resident.

The International Committee of the Red Cross warned on Friday that Barq, Safdi and Sharawneh were close to death.

More than 1,500 Palestinian prisoners, including Safadi, in May ended a mass hunger strike for better conditions in a deal with prison authorities.

One of the terms of the accord was that those held without trial in administrative detention would go free at the end of their current terms, unless fresh evidence emerged against them.

Safadi went back on hunger strike after his detention order was renewed.

Meanwhile, in the West Bank town of Jericho, a former Palestinian militant leader held by the Palestinian Authority without charge since May, said he too was launching a hunger strike “to the death.”

A statement from the The Freedom Theatre, of which Zakaria Zubaidi was a founder member, said he made the pledge at a court appearance on Tuesday in Jericho, where he has been held since his arrest.

It said the court extended his remand for a further 19 days but warned prosecutors that they must charge him by then.

He was a friend of the Jenin-based theatre’s Israeli-Palestinian director Juliano Mer-Khamis, who was gunned down in the northern West bank city in April last year.

Zubaidi was arrested four months ago during a security crackdown following the death of Jenin governor Qadura Mussa, who suffered a fatal heart seizure after shots were fired at his home.