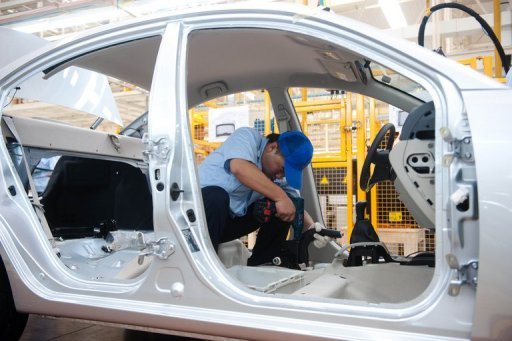 Washington (AFP) – The United States stepped up its fight against Chinese exports Monday with a fresh formal complaint at the World Trade Organization against Beijing’s subsidies for its automotive industry.

The US Trade Representative announced the new action, accusing Beijing of at least $1 billion in illegal subsidies to automotive exporters between 2009 and 2011.

The USTR said China’s effort to build its might as an exporter of cars and car parts had taken direct aim at the $350 billion US auto industry as it rebounds from a crippling recession.

But the WTO move also came as President Barack Obama seeks to rebuff accusations by Republican presidential rival Mitt Romney that he is soft on China, an issue that could resonate in key November 6 election states like Ohio which have a strong auto industry presence.

The WTO complaint is focused on China’s “export base” program, in which Beijing targets support for automotive manufacturers in designated regions to develop them as export centers.

The program has helped China increase auto and auto parts exports from $7.4 billion a year to $69.1 billion in the decade to 2011, the USTR said.

“China’s program appears to provide export subsidies that are prohibited under WTO rules because they severely distort trade,” the USTR said.

“The subsidies provide an unfair advantage to auto and auto parts manufacturers located in China, which are in competition with producers located in the United States and other countries.”

At the initial stage of the complaint, the US has requested dispute settlement consultations under WTO rules.

The complaint announced Monday was the latest in a series of actions Washington has taken to battle against China’s massive advantage in bilateral trade.

In the first seven months of this year China sold $174 billion more in goods to the United States than it bought from the US — on pace to slightly surpass the 2011 full-year bilateral trade gap of $295 billion.

Most of the cases involve US allegations of Chinese support for its industries that violates WTO rules.

In February the Obama administration stepped up its campaign, establishing a special cross-agency unit, the Interagency Trade Enforcement Center, that was targeted at mainly Chinese exports to the United States.

At the time the US auto and auto parts industry was already pressing for action on competing products from China.

“Export subsidies are prohibited under WTO rules because they are unfair and severely distort international trade,” US Trade Representative Ron Kirk said in a statement.

“China expressly agreed to eliminate all export subsidies when it joined the WTO in 2001. China benefits from international trade rules and must in turn live up to its international obligations.”