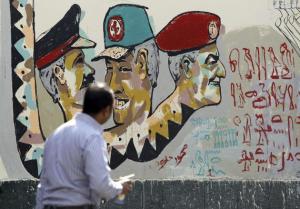 Hundreds of protestors headed to Tahrir square, to express their refusal of the government’s decision to remove graffiti painted on the walls of the square and the nearby streets.

Protestors are now trying to re-paint what was removed by the government, whereas the security forces are standing by, prepared for any violent incidents that might take place.

Ahmed Nagib, a 22 year-old protestor participating in the protest, told Daily News Egypt that he headed towards Tahrir square once he knew that graffiti paintings are being removed by the government.

“Some paintings were removed, and we won’t allow anyone to remove more painting”, added Nagib.