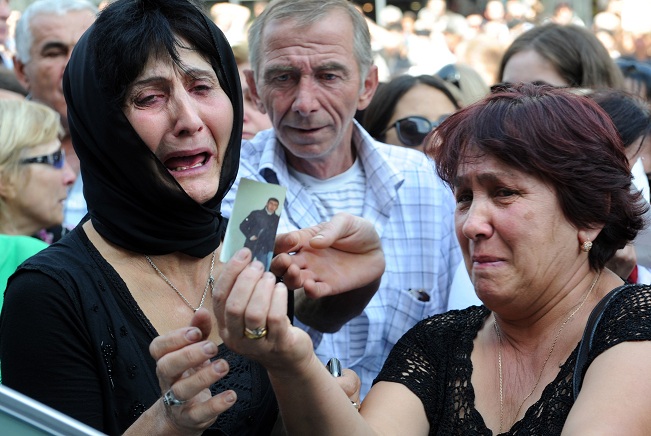 The footage was aired late Tuesday night by TV9, an opposition television station and generated protest in the nation’s capital.

The release of the videos sparked outrage amongst Georgians, who took to the streets to protest the abuses. The protest organisers called for an independent investigation and the resignation of more ministers.

“I am protesting against torture in prisons, which are under the strict control of the authorities,” one demonstrator, bank worker Mikheil Javakhishvili, told AFP. “The authorities are responsible for what’s happening there.”

“Police must immediately enter all prisons,” Saakashvili said on Georgian television. “There must be zero tolerance towards rights abuses,” he stressed. Georgia’s prison minister Khatuna Kalmakhelidze resigned as a result of the scandal.

“What happened in penitentiary number eight is horrific and I have submitted my resignation to the prime minister,” Kalmakhelidze said on television.

One video, dated 24 August, shows dozens of uniformed inmates watching as what is alleged to be prison officers taking turns beating an unarmed man. Other people can be seen lined up and facing the wall, their hands behind their back.

Another aired by TV9 depicted a half-naked man in Georgia’s Tibilisi prison, begging for mercy and crying as prison officers repeatedly abused him before sodomising the man with a baton.

A statement was released by the prosecutor’s office on Wednesday saying it had arrested ten suspects and charged one officer in absentia.

“It should be noted that these were premeditated crimes and there is evidence that those who arranged, conducted and recorded these abuses were paid to do so,” a government statement read.

Presidential elections are scheduled for 1 October and Saakashvili faces strong opposition from Bidzina Ivanishvili, a philanthropist billionaire who, according to AFP, aired several of the torture clips on his television channel.

“Tonight, I tell all the victims of these inhuman actions and the whole nation that the Georgia we have built and we are all building together shall not and will not tolerate such behaviour, in its prisons or anywhere else,” an emergency statement made by the president on Wednesday read.