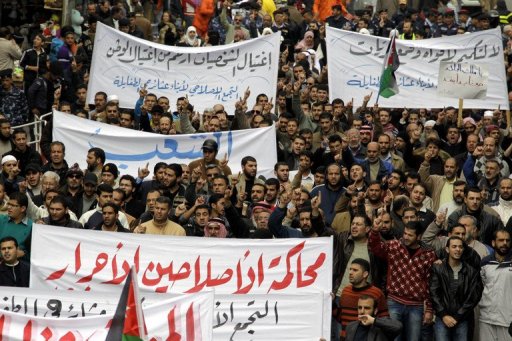 In an unprecedented move, the Jordanian Muslim Brotherhood is looking to officially advocate changing the government structure of Jordan, according to London-based Al-Hayah newspaper.

The “constitutional kingdom” document is a plan reforming the regime to stop the king exercising full executive power. It was presented to the Brotherhood’s shura council in 2006 and later in 2009, receiving little encouragement in both incidents.

It is to be presented in front of the council again for approval. Former head of the Brotherhood’s political committee, Rahil Gharaibeh, assured Al-Hayah that there is almost unanimity concerning the approval of the draft this time.

“There is no veto on the ‘constitutional kingdom’,” Gharaibeh told Al-Hayah. The document is seen as widely controversial for its intention to limit the authority of the palace in ruling the country.

The Brotherhood’s deputy leader, Zaki Bani-Rashid, told Al-Hayah that coming up with a final draft of the document would take “a few more months”, assuring that the Brotherhood had gone “a long way in its plans for economic plans,” only the proposals for a political structure remained to be worked out.

He added that the new economic plan of the Brotherhood for Jordan would be reminiscent of the “renaissance project” adopted by Egyptian president, Mohamed Morsy, during his presidential campaign.

Egypt’s Muslim Brotherhood spokesperson, Mahmoud Ghozlan, denied any coordination between the branches of the Brotherhood on the document.

“It is the first time I hear of such a draft,” Ghozlan said, adding that the Muslim Brotherhood in Egypt doesn’t intervene in the affairs of any other branch. “The people of Mecca are better informed with their own affairs,” he commented, quoting a popular Arabic expression discouraging intervention.

Ghozlan also said the Egypt’s Muslim Brotherhood would welcome such a movement “if the Jordanian people approve.”

Among other changes the Brotherhood and its political arm, the Islamic Work Front Party, are planning to support is amending articles 34, 34, and 36 of the constitution. The amendments would allow the parliamentary majority form the government, and elect the members of the senate rather than them being appointed. The changes necessitate dissolving the current parliament.

News about the new plan has been met with dismay in Jordan. Many opposition movements have accused the Muslim Brotherhood of being after its own interests rather than attempting to create true political reform, according to Egyptian state-owned newspaper Al-Ahram.

The Brotherhood responded by confirming that it has been attempting to change the structure of the regime for at least three years, the ideas were not new.

The Jordanian Brotherhood is boycotting the general elections due to be held soon, a matter which allowed the current regime further criticism of the Brotherhood’s actions.

“How could the Brotherhood demand amending the constitution and changing the regime structure without even taking part in the coming elections?” Jordanian minister of information, Samih Me’aitah, told Al-Hayah.