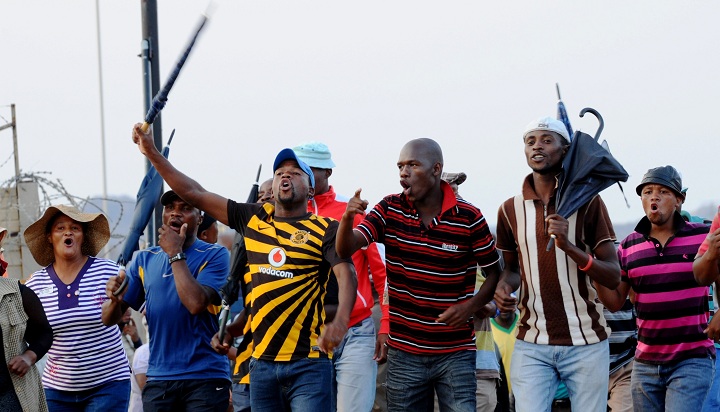 Unrest continued in the Marikana region in South Africa on Wednesday as police fired rubber bullets to disperse protesting miners working for Anglo American Platinum (Amplats) the AFP reported. It comes after a deal was reached with miners working for another platinum producer, Lonmin, on Tuesday.

The police fired tear gas, stun grenades and rubber bullets at around 500 miners who refused to disperse.

Amplats miners held a strike last week, following which; Amplats announced that it would shut down operations fearing for the security of its workers.

Amplats had resumed operations on Tuesday morning, saying “all of its Rustenburg operations have resumed effective from today’s morning shift on Tuesday,” later however, protests broke out.

In Lonmin-owned platinum mine, strikers plan to resume work Thursday after accepting the latest pay offer.

Talks were resumed this week and, according to a statement released by Lonmin on Tuesday night, “following an all-inclusive negotiation process involving trade unions and delegates of striking employees, Lonmin is pleased to announce that it has reached a settlement and a return to work has been agreed for Thursday.”

The South African state-run news agency, SA news, reported that, according to the agreement, “the lowest worker would earn R 9 611 and the highest R 13 022 before deductions and the agreement is effective from 1 October.”

The strikes in Marikana have been often violent with a death toll of 44 since mid-August. On 16 August police opened fire on demonstrators leaving 34 workers dead.

Many were believed to have been shot in the back while trying to escape the scene, according to post-mortem examinations, in what is being reported as the most brutal use of force by police against South Africans since the end of apartheid rule.

The total number of people who died since the start of the strike in August is at least 44. Last weekend, the police also used tear gas and stun grenades to disperse protesting miners. The crackdown came shortly after the South African government said that it would no longer tolerate what it referred to as the “illegal gatherings.”