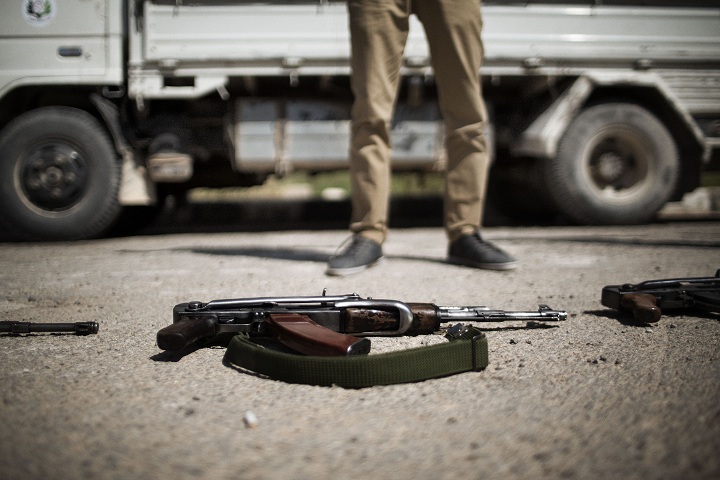 Syrian opposition fighters battled for control of a border gate near the border with Turkey on Wednesday where footage by CNN Turkey showed rebel fighters pulling down a Syrian flag in what is believed to be a government building at the Tel Abyad border gate.

The fighting commenced Tuesday night in the predominantly pro-government province.

It is unconfirmed whether the crossing is now in the hands of the rebels, but the video revealed intense fighting and suggested the rebels were in control of at least part of the crossing.

In Turkey’s border town of Akcakale, several schools were ordered shut after the overnight violence spilled into Turkey. The Anatolian news agency reported shots had been fired into Turkey. Reuters reported stray bullets struck homes in Akcakale, wounding a woman.

Syrian rebels already control two other border crossings in the region, and a third crossing into Turkey would allow for a wider corridor of supplies coming through reaching the fighters.

Establishing complete control over the Turkish border area would also allow for an unofficial humanitarian corridor to be set up, making it easier for the foreign-based opposition supporters to deliver much-needed supplies including ammunition and medicine to fighters.

The economic hub of Aleppo is also situated near the area, making control of the border vital for control over Aleppo for both the government and the Free Syrian Army (FSA).

The fighting in Syria has daily claimed the lives of dozens of people, mostly civilians. A video released Tuesday allegedly shows the formation of a new opposition brigade known as Anssar Allah, an entirely Christian brigade. In the video, the men identified themselves as “the Christian young men of the revolution” who were ready to “defend the land with our Muslim brothers.”

The announcement of a Christian opposition group may be a first as a report published by journalist Aron Lund for the Swedish Institute for International Affairs stated the Syrian uprising has so far been largely fought by Sunni Muslims.

Iran has stepped up their efforts to bring an end to the crisis, according to Iranian state media. Iran’s foreign minister reportedly suggested a regional monitoring mission ahead of a scheduled meeting with Syrian President Bashar Al-Assad in Damascus on Wednesday.

The ongoing violence in Syria sparked condemnation from Amnesty International. On Wednesday a new report published by the organisation condemned indiscriminate attacks on civilians. Donatella Rovera, senior crisis response adviser for Amnesty International, criticised the government for routinely bombing and shelling towns and villages “using battlefield weapons which cannot be aimed at specific targets, knowing that the victims of such indiscriminate attacks are almost always civilians.

” Rovera’s comment was also aimed at opposition fighters operating under the FSA banner, as the organisation warned armed opposition groups that “the prohibition of indiscriminate attacks applies equally to them.”