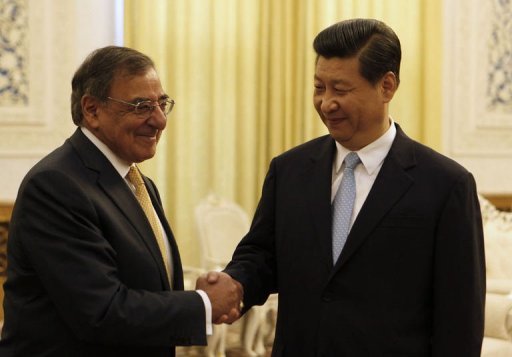 US Defense Secretary Leon Panetta sought to reassure Beijing on Wednesday over Washington’s strategic tilt to the Pacific, telling a military audience it was not an attempt to curb Chinese power.

President Barack Obama, concerned about China’s growing military and economic might, has called for a shift in focus to the Asia-Pacific region, with the US Navy planning to station most of its ships in the area.

But China has questioned whether the American military’s “pivot” to Asia is really about countering Beijing.

“Our rebalance to the Asia-Pacific region is not an attempt to contain China. It is an attempt to engage China and expand its role in the Pacific,” Panetta said in the Chinese capital.

“It’s about creating a new model in the relationship of our two Pacific powers,” he told cadets at an armoured force engineering academy.

As the world’s two largest economies, China and the US must forge stronger ties between their armies to avoid potential conflict or crises, Panetta said.

“Our goal is to make sure that no dispute or misunderstanding escalates into unwanted tensions or a conflict,” Panetta said.

His remarks represent the latest effort by Washington to bolster military relations with the People’s Liberation Army, which has been mostly reluctant to promote contacts with the American top brass.

Panetta’s three-day visit to Beijing — his first as Pentagon chief — coincides with mounting tensions between China and Japan over disputed islands in the East China Sea, with a wave of anti-Japan demonstrations across China on Tuesday.

Panetta appealed for calm on both sides and described US policy as based on “basic principles” including free commerce, the rule of law, open access to sea, air, space, and cyberspace, and resolving disputes “peacefully without coercion or the use of force”.

The Pentagon chief also found himself in the middle of Chinese domestic politics, becoming the first foreign dignitary to meet Vice President Xi Jinping, the country’s leader-in-waiting, since he re-emerged from a two week absence from public view.

Xi looked relaxed and fit as he greeted Panetta in the Great Hall of the People, despite a wave of rumours about the vice president’s health and political career during the fortnight-long hiatus.

In his speech to young military officers, Panetta stressed the importance of international norms and rules to ensure stability in the Pacific, a clear reference to a spate of territorial disputes that often pit the economic powerhouse China against smaller countries.

International law, backed up by US naval power, had helped bring prosperity and peace to the region and China had profited from it, he argued.

“Many countries — and many millions of people in the region — have benefited from this rules-based order, and that includes China,” he said.

But China and the United States have disagreed about navigation rights in the western Pacific, with Beijing taking an assertive stance on claims to the South China Sea and the East China Sea.

Panetta said he was hopeful the feud over the archipelago in the East China Sea would be settled peacefully after his talks this week in Tokyo and Beijing.

“I am confident after my discussions with both Japanese leadership and Chinese leaders that both are concerned with finding ways to to able to resolve these issues,” he told the cadets in a question and answer session after his speech.

Panetta also tried to reassure China over the deployment of a second powerful US radar to Japan for its missile defence system, saying it was aimed at the threat posed by North Korea’s ballistic missile arsenal and not at China.