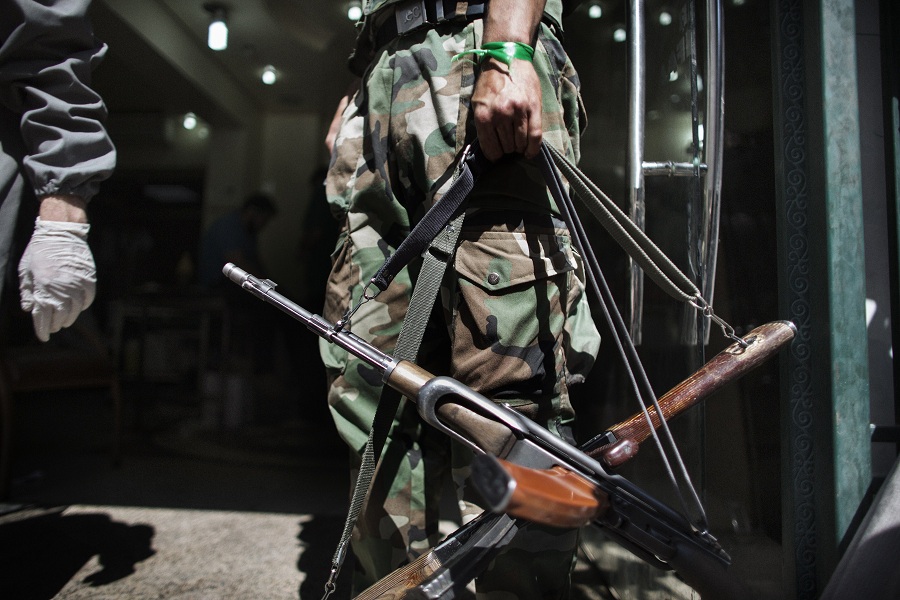 The international media has not always been kind to Syria’s revolutionary people. For months on end, many of the latter turned themselves into instant citizen-journalists to document their uprising and the violent repression of the Syrian regime, loading clips and photos taken from their mobile-phones to various social networks; still, the established media, insinuating that only it could really be trusted, covered these events with an ever-present disclaimer that these images could not be independently verified. Since the Damascus regime was refusing to allow more than a trickle of foreign media personnel into the country, chaperoned by the infamous minders, what the Syrians themselves were reporting was deemed unreliable.

Nevertheless, an increasing number of brave journalists dared to sneak into Syria at great personal risk, reporting the same events which activists had attempted to spread to the world. For the most part, experienced journalists were perfectly capable of distinguishing between straight propaganda from a regime fighting for its survival and real information from a variety of other sources. Overwhelmingly, ensuing reports about Syria gave a voice to “the other side” or at least quoted opposing points of view, if only for balance. In some cases, journalists found no room to cater for the regime’s claims, especially when reporting from civilian areas under relentless attack by Bashar al-Assad’s forces.

It was from the wretched Homs district of Baba Amr, under siege and shelling for an entire month, that the late Marie Colvin, amongst others, testified on the eve of her death under the regime’s shells about the “sickening situation” and the “merciless disregard for the civilians who simply cannot escape.” Like her, most of those who managed to get into Syria have testified about the regime’s repression of a popular uprising, even after the latter evolved to include an armed rebellion.

Robert Fisk, a seasoned war correspondent who has covered the region for decades, surprisingly broke a mould, gradually allowing himself to become a part, and not simply a witness, of the Syrian regime’s propaganda campaign.

On 30 October 2011, Fisk, who works for the Independent newspaper and whose reports are widely republished, was a guest of Syrian state television for an extended interview during which his legendary directness seemed subdued, as he meekly advised his host that he feared the Syrian authorities were running out of time to turn the situation around. In an article entirely dedicated to Bouthaina Shaban, one of Assad’s advisors, he quoted some of her extraordinary tales without adding one of his trademark comments. Thus, he didn’t challenge the claim that a Christian baker in Homs was accused (supposedly by the extremists the regime says are leading the uprising) of mixing whisky in the bread.

Over the last few months, Fisk’s pieces on Syria have consisted more of commentary than of reporting, with a growing emphasis on the conspiracy scenario as he reminds readers that the governments criticising the Assad regime were themselves hardly examples of freedom or democracy. This is indeed true in many cases, but is not directly relevant to the Syrian people’s uprising, which moreover he increasingly reports in the sectarian terminology he had previously criticised when covering the invasion and occupation of Iraq.

But even copious editorialising of this nature could not have heralded Fisk’s shocking decision to embed with the Syrian regime’s armed forces, when he had previously stated (on 22 January 2003) that “war reporters should not cosy up to the military”. In Syria, Fisk embedded first in Aleppo with the commander of operations in the embattled city, and then in Damascus and its suburbs under attack by the regime. In particular, his piece on Daraya’s gruesome massacre has shocked many Syrians.

In his article of 29 August 2012, Fisk relates that an alleged exchange of prisoners was being negotiated between the regime and rebels in Daraya. When talks failed, he explains, regime forces had no choice but to storm the town, an attack during which several hundred inhabitants were killed. In Fisk’s account, however, there is no room for even the possibility that they were killed by security forces. On the contrary, his narration consistently points to “rebel” snipers. Fisk even reveals that a mortar-round landed on a large military base in Damascus from which he set out, “possibly fired from Daraya itself” (from the rebels, the reader may assume); and that the rebels supposedly attacked the armoured vehicle in which Fisk had “cosied up” with officers of the elite Assad army while driving through Daraya. Likewise, he ascribes to rebels the stormed homes, broken utensils, burned carpets and confiscated computer parts, speculating that these were “to use as working parts for bombs, perhaps?”

All the firing he describes is never attributed to the regime’s armed forces which stormed the town, but to the Free Syrian Army which he implies is the only violent party; nor does the Free Syrian Army seem to have a cause or a logical reason, from its perspective at least, to carry out such violent actions.

Daraya’s Local Coordination Committee (LCC), commenting on this article, points out that Fisk met with neither opposition nor activists while there (nor, for that matter, at any other time). And after days of our liaising with Daraya friends, activists and inhabitants, it is clear that nobody has even heard of this prisoner-exchange story which Fisk attributes to people there.

Furthermore, what could the relation be between this alleged failed prisoner-exchange and the massacre? And why would fighters in the opposition kill inhabitants of a town that is one of the centres of the Syrian revolution because of this supposed exchange? Fisk presents no explanation for that, limiting himself to showing that the Free Syrian Army fighters were responsible for this failure, in contrast to the regime’s forces which, according to the testimony of the officer in charge with whom Fisk was embedded, went out of their way to free hostages before storming the town. Claims that the Daraya victims were relatives of government employees, including a postman killed simply because he was such an employee, are equally quoted without sourcing.

This account closely resembles the regime’s tale about the Houla massacre in May 2012, whereby the victims of Houla were also said to be regime supporters killed because they were relatives of a member of parliament. It is known today that this is pure invention and that the massacre, as confirmed by the United Nations human-rights inquiry, was carried out by the regime’s armed forces and shabbiha (armed gangs). Is it possible that this embedded journalist’s source about the new massacre is the same “temple of truth” who had revealed facts of the governmental enquiry committee on the Houla massacre?

As in Houla, the story that the massacre victims were somehow related to regime or government members is false. Furthermore, Fisk manages to say nothing about the five-day long shelling of Daraya, as is the regime’s norm before storming a town. Nor does he even give the correct number of fully documented victims, which is nearly double the 245 he quotes.

It seems incredible Fisk cannot imagine that Daraya’s inhabitants could be too afraid of the regime’s forces, infamous since decades for their exceptional criminal capacity, to tell him who actually killed those victims. Indeed, Daraya LCC’s trusted sources from the field-hospital confirmed that a regime sniper killed the parents of Hamdi Koreitem, named by Fisk, and that they also shot Khaled Yehia Zukari’s wife and daughter.

As if being embedded on the day of the Daraya massacre wasn’t enough, Fisk had no objection to being taken to a jail (more likely one of the regime’s intelligence centres) where he was presented with four detained “jihadists”. These prisoners, two Syrians, a Frenchman of Algerian origin and a Turk, were accused of various terrorism charges including a bombing in March 2012. While they all sat in the bureau of the officer in charge, the prisoners proceeded to tell Fisk the kind of stories the regime had been spreading for months. At a certain point, Fisk asked the officer to leave, which after mild prompting he did, just like that. Alone with their interviewer, who was allowed to offer them chicken and chips, the terrorists answered his questions, shared their stories, and informed Fisk that they had only been subject to bad treatment (but not torture) on the first day of their imprisonment; one had even received family visitors. A situation which few other prisoners in Syria, let alone Islamists or terrorists, can dream of.

As each of the men explained his specific case to Fisk, perhaps he marvelled at the incredible good fortune of meeting jihadists who fitted the exact profile the Syrian regime has painted of those sowing havoc in the country. Indeed, the terrorists explained they had turned to jihad because of indoctrination in Turkey or Afghanistan, because of Al-Jazeera’s incitement, because of some sectarian sheikh’s hate-mongering, and (last but not least) because the Emir of Qatar was stirring revolution in Syria.

It is notable that Fisk neglects to mention how the visit came about, who organised it for him, or even why he thinks he was the chosen one for this largesse from a regime known to ban, jail and kill journalists (62 killed so far while covering the Syrian revolution, including citizen-journalists). Nor does he give much thought to the possibility that he was brought to these detainees (if they really were detainees and not acting on the intelligence service’s orders) because they would say precisely what suited the regime. But everything repeated by Fisk toes the regime’s propaganda line, Syrian revolutionaries are terrorists, foreign fighters are among them, many are thieves, rapists and murderers, all have been influenced by conspirators. It is understandable that the regime would want to say this, but it is not understandable why Fisk would say it, or why he wouldn’t be suspicious of being taken for a ride.

One of the co-authors of this article, Yassin, spent many years in jail in Syria on charges much less serious than those of these terrorists, but no foreign or local journalist visited me or hundreds of my acquaintances and friends who have been detained for decades. From my personal experience of intelligence in jails, I assume that the director of the jail Fisk visited felt that the journalist was “one of us”, and would be impressed at the regime’s capacity to gain such support. What is also strange is that Fisk, whose requests seem to be heard in Damascus, did not ask to visit his peers, such as journalist and human-rights activist Mazen Darwish, who was allowed no visits from his young wife or any of his relatives after nearly seven months of detention; or his colleague Hussein Ghreir, who left behind him a young wife and two children; or Yehia Shurbaji, who could inform him about the realities of his home town of Daraya.

Perhaps Fisk’s good relations with the regime will allow him to visit other jails, overflowing with tens of thousands of detainees, prisoners of conscience, denied their freedom for having demanded the right to free expression and choice. This would certainly be a journalistic exclusive; they are no less in need of chicken and chips than the detained jihadists, and the stories they would tell would give him a much more reliable account of the Syrian revolution.

In Syria, Robert Fisk has done what he long admonished other reporters for doing. Is it because he has fallen under the spell of the regime, has become indoctrinated or has suddenly lost his instincts? Or has he become a willing accessory to the Assad regime’s propaganda, if only for the sake of being in a league of his own?

The first casualty of war isn’t truth, it’s helpless civilians, and Robert Fisk has forsaken both.

The article originally appeared on http://www.opendemocracy.net/