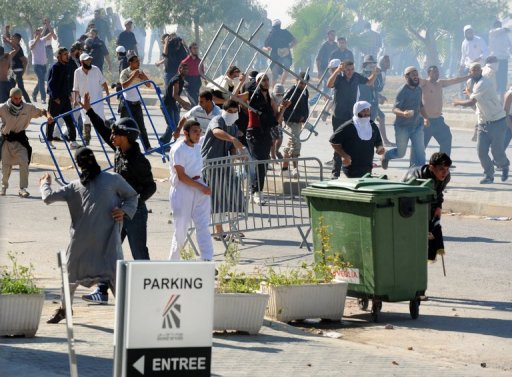 AFP – TUNIS — The veteran leader of Tunisia’s ruling Islamist party told AFP that the authorities would crack down on hardline Salafists after deadly violence around the US embassy, saying they pose a threat to the country’s freedoms and security.

“Each time that parties or groups overstep our freedoms in a flagrant manner, we have to be tough, clamp down and insist on public order,” Ennahda chief Rached Ghannouchi told AFP in an interview.

“These people pose a threat not only to Ennahda but to the country’s freedoms and security.”

Ghannouchi denied that the Ennahda-led coalition government had been lax in its failure so far to arrest Salafist leader Seif Allah Ibn Hussein, suspected of organising the violent protest last Friday at the US embassy and adjacent American school in Tunis.

Now slain Al-Qaeda leader Osama “bin Laden remained at liberty for years without the world’s intelligence agencies capturing him, so it’s not surprising that someone can go into hiding,” he said.

“But the police will hunt him down until he has been arrested.”

The Ennadha-led government has come in for strong criticism in the Tunisian press for failing to arrest Ibn Hussein, also known as Abu Iyadh, when he delivered the sermon at a Tunis mosque earlier this week.

Ibn Hussein, who heads the extremist Ansar al-Sharia movement, preached at the Al-Fatah mosque in the heart of the capital on Monday surrounded by his followers, and then left, despite a heavy security deployment around the building.

During his sermon, he accused the police of provoking the protesters who attacked the US embassy, and called for the resignation of Interior Minister Ali Latayedh, an Ennahda member.

As fears mounted of fresh violence after the mainly weekly Muslim prayers this Friday, Ghannouchi said that from now on the security forces would deal firmly with any breaches of public order.

“The police have learnt the lesson and I don’t think there’s going to be any repetition (this Friday),” he said.

The interior ministry banned all demonstrations on Friday after receiving a tip-off about preparations for violence over a US-made anti-Islam film posted on the Internet and cartoons of the Prophet Mohammed published by a French weekly.

Tanks and barbed wire were deployed around the French embassy, which closed on Friday as a precautionary measure, while French schools in the former colony have been shut since Wednesday.

“We don’t like to see the capital looking like this, but they are provisional security measures which will be lifted soon,” said Ghannouchi.

The ageing Ennahda leader, who is thought to have a large influence on government policy, stressed that his party was not calling its supporters to take to the streets, but “to defend the Koran and the Prophet by peaceful means.”

“By writing novels, by making films, songs, works of art (they can) present Islamic civilisation in a favourable light, instead of these negative acts, of screaming and violence, which do not serve Islam but rather its enemies.”

But Ghannouchi also deplored the caricatures of the Prophet published by satirical weekly Charlie Hebdo on Wednesday.

“We have expressed our indignation at the cartoons, which are an attack on the belief of Muslims, and which incite hatred and war,” he said.