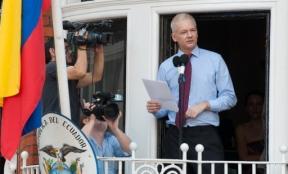 (AFP) – LONDON — The Foreign Office was tightlipped on Saturday over a proposal from Ecuador that WikiLeaks founder Julian Assange be transferred from London to Sweden but stay under Quito’s protection.

Sweden’s foreign ministry for its part said Stockholm had not received any approach from Quito and would not speculate on the proposal.

Ecuador’s Foreign Minister Ricardo Patino said he was weighing such a transfer as a possible alternative for Assange to “remain under our protection while also satisfying the demands of the Swedish justice system.”

Assange took shelter in the Ecuadoran embassy in London in June after exhausting all appeals against extradition from Britain to Sweden, where he is wanted for questioning over sexual assault allegations.

Ecuador has granted him diplomatic asylum.

Patino hinted at “new” developments in the Swedish case, saying “several elements of proof have been dismissed,” though he declined to provide further details.

In a sign that diplomatic moves are afoot in the Assange case, Patino said he planned to discuss the issue with his British counterpart William Hague on the sidelines of the UN General Assembly in New York on Thursday.

In London, the Foreign Office refused to be drawn on the Ecuadoran proposal.

A spokesman said: “We’ve made our position very clear on Mr Assange, mainly that he has exhausted the option of appeal and we are under a binding obligation to extradite him to Sweden and we have to carry out this obligation and we fully intend to do so.”

Swedish foreign ministry spokeswoman Linn Duvhammar told AFP, “We cannot speculate on what such a solution might be like,” adding, “We have received no request.”

The lawyer for Assange’s alleged victims, Claes Borgstroem, dismissed the idea as “asbsurd.”

“There is no reason to treat Assange differently from other people in this situation,” he told the TT news agency. “There must be equality before the law.”

Assange, a 41-year-old Australian, fears Sweden will hand him over to the United States, where he could face prosecution over the release of a vast cache of leaked Iraq and Afghanistan war reports and diplomatic cables.