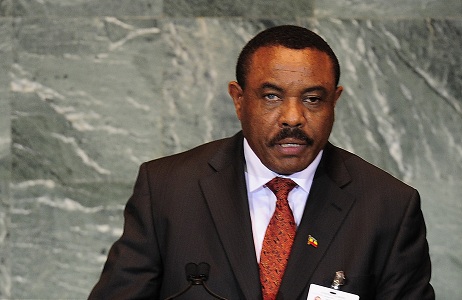 Ethiopian Prime Minister Hailemariam Desalegn was sworn in on Friday. The Ethiopian state news agency reported his first address to congress, in which Hailemariam spoke of his plans to combat inflation, modernise agriculture, address a swath of infrastructure needs, and continue to develop the Nile basin.

Hailemariam follows in the footsteps of the polarising Meles Zenawi, who rode a revolution to power in 1991. Zenawi was reviled by many of his people for his ruthless method of dealing with internal dissent. Still, upon his death he garnered wide praise from many world leaders.

At his funeral, United States ambassador to the United Nations Susan Rice said, “he was selfless, tireless and totally dedicated to his work and family. In the toughest of times, he retained that twinkle in his eye.”

“It is true that Ethiopia will not be the same after Meles Zenawi, but the question is how different,” Ethiopian writer Kirubeal Bekele told Daily News Egypt. “Right now, the Ethiopian people are wondering if Hailemariam will continue where Zenawi left off or will he be his own man. And they are waiting with their finger crossed.”

One of the biggest challenges to Hailemariam’s ability to change the status quo is that the vast majority of seats in the Ethiopian legislature still belong to the Tigrayan People’s Liberation Front (TPLF). The TPLF is notorious for their near total domination of Ethiopian politics and their steadfast refusal to compromise with opposition forces.

Finding a way to curb the TPLF’s power is the only way Bekele sees Hailemariam as showing any real power. “Fighting TPLF’s domination and coercion is the most significant challenge facing Hailemariam,” Bekele said. “His background is very different from TPLF and many other politicians in Ethiopia. He is basically a technocrat with a religious bent who happens to be in politics by chance rather than by design.”

However, given the TPLF’s domination of Ethiopian politics, it seems unlikely Hailemariam will be able to exert much power. The TPLF runs the military, the police, and the EFFORT Corporation; an entity that makes up an enormous amount of the economy with holdings in industrial engineering, tourism, transportation, construction, pharmaceuticals, and more.

“Hailemariam would have to find ways to take over these elements of power from TPLF by any means necessary if he is going to be a real leader and not some toothless figurehead as Ethiopia’s president, Girma Wolde-Giorgis, has been for some time now,” Bekele said.

Many Ethiopian commentators seem willing to give their new prime minister a chance, if for no other reason than they see nowhere to go but up. Bekele agreed that Ethiopians seem prepared to delay judgment. “It looks like they are ready to give him a chance, though reluctantly.

One thing is true. They are relived that Zenawi, who ruled by sword and manipulation is gone. They somewhat feel better for seeing a new face but they have a lot of unanswered questions and worries.”