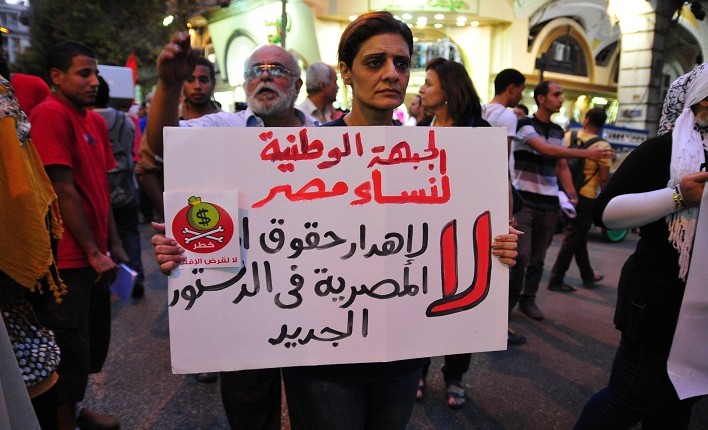 The constitutional article on gender equality drafted by the constituent assembly’s Committee on General Rights, Freedoms and Duties has been publicly denounced by  several political parties and interest groups.

The article, number 36 out of a total of 56 in the General Rights, Freedoms and Duties section of the constitution, reads as follows:

“The state is committed to take all legislative and executive measures to entrench the principle of the equality of men and women in the areas of political, cultural, economic and social life without prejudice, according to the provisions of Islamic law.

The state shall provide free maternal and child health services and ensure the protection and care of women’s social and economic welfare and her right to inheritance, and reconcile her duties toward the family and work in the community.”

The article raised concerns among women’s rights groups and progressive political parties. The provision that gender equality be limited to the provisions of Islamic Shari’a, they argue, takes away many of the gains women’s rights movements all over the world have made over the years.

The Egyptian Social Democratic Party made a statement pointing out that article 36 as currently drafted, can be interpreted in conflicting and opposing ways by different Islamic scholars, depending on which school of jurisprudence they belong to.

The party blamed the “predominance of one political faction” in the constituent assembly for the drafting of such an article.

The constituent assembly, tasked with drafting Egypt’s new constitution, is composed of 100 members. Only six are women. At least 60 members of the assembly belong to Islamist groups or parties.

Members of the constituent assembly have recently proposed leaving the issue of female genital mutilation “to be decided by the family” but “only after the girl is 18 years-old” as opposed to the current law in which the practice is banned.

Others in the assembly have rejected the inclusion of an article outlawing human trafficking and the sale of women and children for various reasons. Some claimed it was “needless” because “Egypt does not suffer from this phenomenon” while others said such an article would ban the marrying of girls under 18 years of age which is against the provisions of Islamic Shari’a.

A member of the assembly recently came under fire for calling for the new constitution to allow girls to get married as soon as they have been through puberty in accordance with Islamic Shari’a.

The Egyptian Social Democratic Party statement said such an article was going against the rights acquired by women throughout the ages and called for progressives within the assembly to resign in protest if the article is passed in its current form.

“We also call on all concerned members of the constituent assembly to immediately withdraw if voting within the assembly allows Article 36 to pass. They should consider it violation of justice and equality on our road to modern Egypt and join national forces to resume our revolution for human dignity and social justice, which is well deserved by Egyptians without discrimination.”