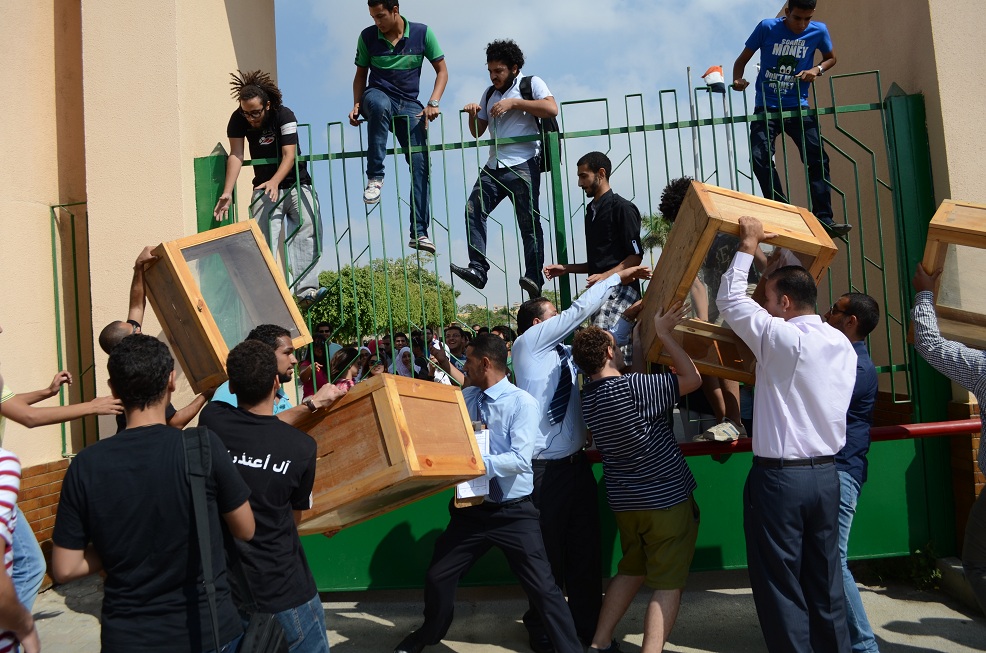 An unauthorised student referendum was held at the German University in Cairo (GUC) on Saturday and Sunday, despite attempts by the university administration to halt it.

The referendum was to vote on new student proposed university bylaws, but campus security was called to prevent students from installing ballot boxes on Saturday morning. The students involved claimed they were attacked by the security guards.

“They smashed the boxes over our heads,” former president of the GUC Student Union, Amr Abdel Wahab, told Daily News Egypt. At least one female student was injured according to Abdel Wahab.

“We tried to file a report with the police about the incident, but they refused to document it,” Abdel Wahab said.

The student held the referendum regardless.

“The turnout has been relatively high,” Abdel Wahab said. “Over a thousand students participated during the referendum’s first hour.”

Another participating GUC student, Karim Naguib, put the number of participants at over 800.

The referendum, held inside GUC campus without approval from the administration, was called for almost two weeks ago by several student movements within the GUC.

“It isn’t just the work of the student union; it involves all political clubs and movements within the university such as the Muslim Brotherhood, the Revolutionary Socialists and the leftist students,” Abdel Wahab said.

The students have been demanding a change to the bylaws of the university used in running the student union since the January 2011 revolution.

“In 2011, many GUC students protested in order to create a student union; something that was not possible until the January revolution,” Naguib said. A student union was accordingly elected, but operated according to bylaws created by the university administration.

The administration promised to change the bylaws, Naguib claimed. Following its election, the 2011 student union formed a constitutional team which drafted a new bylaws charter and presented it to the administration, only to have it turned down.

This year, the administration called for new student union elections, which met with little approval from students.

“The normal student union is supposed to include 147 members,” Naguib said.  “The one elected in 2012 only involved 40 members; only seven of them are still standing while the rest resigned from their posts following several calls and a petition demanding the new student union’s resignation.”

Students are pushing for the adoption of new bylaws drafted by the 2011 student union, while the administration refuses to acknowledge any bylaws unless they come through the 2012 Student Union.

“Thus, we decided to hold this referendum regardless of the administration’s position on the matter,” Naguib said.

Daily News Egypt could not reach the GUC administration for comment.

Should the result of the referendum be yes, Abdel Wahab said, “we will pressure the administration to adopt the new bylaws”. However should the result be no, the bylaws will be redrafted again. The results are due to be announced at the press syndicate on Monday.