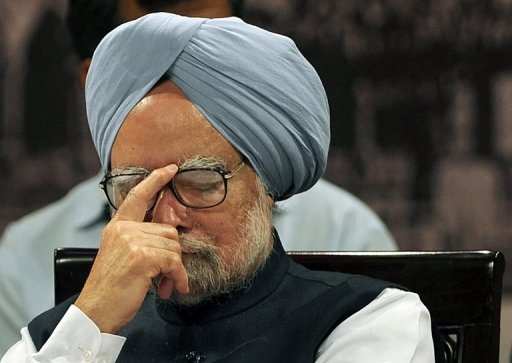 NEW DELHI (AFP) — Security men muscled away a protester who heckled Indian Premier Manmohan Singh on Saturday as he was about to deliver a speech defending contentious reforms aimed at reviving a flagging economy.

The man, identified by state media as a Supreme Court lawyer, stripped down to his undershirt and trousers, stood on a table and shouted for the prime minister to “roll back” the liberalisation measures at an international legal conference.

Security men pulled the protester away and one security officer placed a hand over the man’s mouth to muzzle his shouts as they removed him from the invitation-only event and detained him for questioning.

The prime minister waited for the man to be taken out of the conference before delivering his speech, in which he said India needed the reforms to restore confidence in the economy and attract much-needed foreign investment.

Singh’s speech followed his televised pitch late Friday for public support for the slew of measures to further open up India’s still inward-looking economy that has cost his Congress government its majority.

In Friday’s speech, the premier said he had acted in the national interest to stem “a loss of support in our economy” and asked for people’s “trust, understanding and your cooperation” to avert a financial crisis.

“Money does not grow on trees and that is why we have made these decisions,” said Singh, who turns 80 next week. “At times, we need to say ‘No’ to the easy option and say ‘Yes’ to the more difficult one.”

The moves, of which the boldest is a step to allow foreign supermarkets such as US giant Walmart to set up shop in India, have prompted nationwide protests and the exit of a key coalition ally.

While political opponents accused Singh of selling out the country to foreign interests, the media and business leaders on Saturday lauded him for his “straight talk” in addressing the problems facing Asia’s third-largest economy.

“The PM’s straight talk on TV and his greater effort to reach out deserve credit,” commented the influential Indian Express daily in an editorial.

It said the opposition had ended up looking “uncaring about the urgency of the economic troubles that loom over us”.

The tabloid Mail Today went further, proclaiming “The Dream Team is Back”.

The front-page headline was a reference to Singh and his pro-market finance minister P. Chidambaram who were known as the “dream team” in the 1990s for moves to kickstart the liberalisation of the socialist-style economy.

The newspaper added in an editorial the only thing Singh’s administration had to fear “was fear itself” in carrying out its reform agenda. It said the opposition was “unlikely to pull the rug” from under the government’s feet, even though it was now a minority in parliament.

Adi Godrej, president of the Confederation of Indian Industry, said Singh had “unambiguously sent a message that the government is determined to see through the reforms”.

“This is most encouraging,” said Godrej, one of a number of business leaders who have been pushing the government to take the policy initiatives to shore up the economy.

The economy grew by just 5.5 percent in the latest financial quarter, its slowest clip in nearly three years, while ratings agencies have warned India is in danger of being downgraded to junk status unless the government acts decisively to rein in its gaping budget deficit.

The government appeared in no immediate danger of collapse after the regional secular Samajwadi Party vowed to keep out of power the main opposition Bharatiya Janata Party and its Hindu nationalist agenda.

But even the Samajwadi Party is against foreign supermarkets entering India, underscoring the tough task facing the government in pressing ahead with reforms