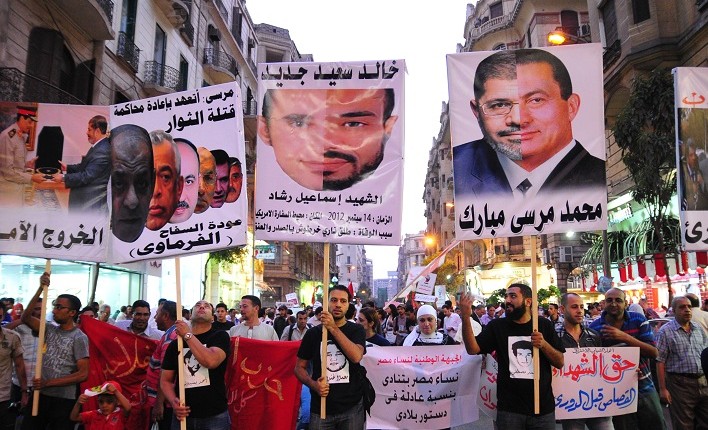 Around 300 protesters converged on Saturday afternoon at Tala’at Harb Square to “march for the recovery of the rights of Egyptians.”

As the march made its way from the square towards Mohamed Mahmoud Street, demonstrators chanted for the fall of military rule and of the Muslim Brotherhood’s supreme guide.

Banners representing a wide range of parties including the Socialist Revolutionary Movement, the Kefaya Movement and the Egyptian Communist Party were held next to ones calling for justice for the 8 April officers and those who lost their lives at the hands of the army and Interior Ministry.

Leading the protest was labour activist Kamal Khalil, who on Wednesday announced the formation of the Revolutionary Democratic Coalition (RDC), a group of ten leftist political parties and movements.

Khalil had announced plans for Saturday’s march at Wednesday’s press conference, calling on all revolutionary groups, regardless of specific ideological differences to join. Most member groups of the RDC were represented at Saturday’s march among the 19 groups that had officially announced their participations.

The demonstrators’ demands centred around five demands previously articulated by Khalil and the participating movements.

The group called for the dismissal and prosecution of the interior minister for crimes committed against revolutionaries as the manager of security in Assiut on 26 January 2011, in addition to the manner in which the ministry has dealt with protesters during his tenure as minister.

They also demanded the reformation of the Islamist-dominated Constituent Assembly to better represent all Egyptians.

The rejection of new foreign loans “involving colonial privileges” was called for, based on claims they would be added economic burdens to future generations. Protesters chanted against the IMF loan and voiced disapproval over money coming from Saudi Arabia and Qatar.

Protesters called for the immediate release of the 8 April officers and other revolutionaries currently detained in military prisons. The 8 April officers were arrested in 2011 for their participation in demonstrations against the attack of a peaceful sit-in.

Lastly the group strongly denounced the safe exit given to Egypt’s military council, demanding instead a trial to investigate their roles in the bloodshed of Egyptians.

“The rights of the martyrs have not been realised,” said Khaled Ramadan, an electrician. “We still have the same regime that we all refused last year.”

“No one has dealt with corruption yet, and for this reason, we haven’t seen the rights for the martyrs, their families, and all Egyptians in need,” said Abdel Nasser Abu Reda, a member of the Workers and Farmers Party.

“We’ve been here for almost two years, no real steps have been taken,” said student Mosaab Amer. “Revolutionaries and the 8 April officers are still detained and the Ministry of the Interior plays the same role it did last year.”

The march ended at the corner of Mohamed Mahmoud Street and Tahrir Square, where protesters continued raising banners and chanting for “bread, freedom, and social justice.”