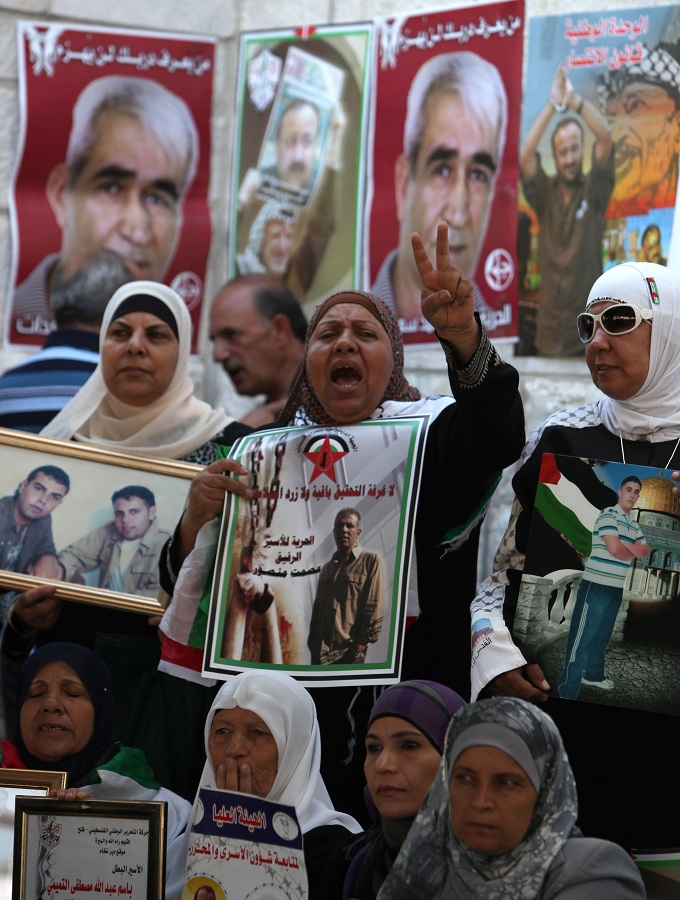 After having reached a deal not to subject Palestinian prisoners to solitary confinement, news surfaced Saturday that Israeli prisons still impose isolation on Palestinians. Protests were held in response in the West Bank, with police foiling a self-immolation attempt.

According to the Palestine News Network (PNN), the Ministry of Detainees and Ex-Detainees’ Affairs said on Saturday that Israeli is backing out of an agreement with Palestinian prisoners not to subject them to solitary confinement. The PNN added that while 17 were taken out of solitary confinement, at least two remain in isolation, deprived of family visits and adequate medical care.

Also on Saturday, the Popular Front for the Liberation of Palestine (PFLP) called for protests in Ramallah in solidarity with Palestinian prisoners. The protest was called to draw attention to Palestinian prisoners on hunger strike. Samer Al-Barq, Hassan Safadi and Ayman Sharawna have been refusing food for over 120, 90 and 80 days respectively, according to the September monthly report by Addameer Prisoner Support and Human Rights Association (APSHRA).

Al-Barq is demanding to be transferred to Egypt. Safadi has received an Israeli court order that his administrative detention not be renewed and is demanding immediate release.

Also highlighted by protesters were the “pre-Oslo” prisoners, 111 inmates of Israeli prisons who have been detained since before the signing of the Olso Accords in 1993. President of the Palestinian National Authority Mahmoud Abbas said last week that these prisoners must be released, independent Palestinian news agency Ma’an reported.

On Thursday, a 30 year old former detainee, Abeer Odeh, tried to set herself on fire in Ramallah. According to Ma’an, Odeh attempted to self-immolate to highlight the neglect of former detainees by the ministries of health and detainees and ex-detainees. Her attempt at self-immolation was stopped by Ramallah police.

According to APSHRA, there are over 4,600 Palestinian political prisoners. Among them are around 200 held in administrative detention and around 200 child prisoners.

Administrative detention as described by the APSHRA is “a procedure that allows the Israeli military to hold prisoners indefinitely on secret information without charging them or allowing them to stand trial.” A documentary by the Palestinian Centre for Human Rights, said prisoners under administrative detention are subject to torture, cruel, inhumane and degrading treatment.