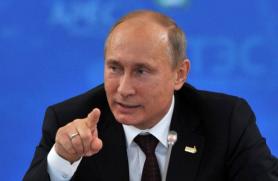 Friday’s near-unanimous lower house vote in the first of three readings came on the heels of President Vladimir Putin’s decision to ram through a law branding as “foreign agents” local groups with funding from abroad.

Former spy Putin accuses Washington of funding the wave of protests that rose against his dominant 12-year rule this winter and recently saw the foreign ministry shut the door to the USAID development agency’s work in Russia.

The State Duma’s action passed without notice from the state media and was only reported in detail by the respected Vedomosti business daily on its website.

The paper noted that the bill was initially introduced to parliament by Putin’s cabinet in 2008 when he became prime minister upon completing the two successive Kremlin terms allowed by the constitution.

But Putin’s four-year presidential stand-in Dmitry Medvedev — a lawyer by training who preferred more liberal rhetoric before ceding his Kremlin seat back to Putin in May — sent the draft back down for further study in 2009.

The highly-sensitive measure specifically addresses the definitions of “spy” and “state treason” — two of Russia’s toughest offences that could put those found guilty in prison for up to 20 years.

It is being sponsored by the feared Federal Security Service (FSB) agency that succeeded the KGB in post-Soviet Russia and was headed by Putin in the years preceding his meteoric rise to the presidency in 2000.

The new version broadens the definition of “spies” to include Russian nationals who help foreign states or organisations upset the country’s “constitutional order, sovereignty or territorial and national integrity.”

Current law simply refers to actions that “damage the foreign security of the Russian Federation” and makes no reference to domestic politics at all.

Rights groups noted that the expanded wording may be used to target advocacy groups such as the prominent human rights organisation Memorial and others working to introduce broader pluralism to Russian society.

Putin has promoted a top-down command system and plays up “domestic order” in speeches dealing with social affairs.

Memorial has been particularly active in the violence-wrecked North Caucasus and defended entire families from prosecution against terrorism and other charges linked to Islamic militancy.

The group — funded by USAID and others — on Friday officially broke Russian law by ignoring a deadline by which it had to register as a “foreign agent” or face a fine.

“Memorial will not take part in events leading to the destruction of Russian society” it said in a statement. “This law is illegal and immoral to its core.”

The tiny organisation may now have to pay up to one million rubles ($32,000) under a new ruling party sponsored penalty that was also given initial approval this month.

Putin has largely scoffed at the street protests as a consequence of Washington’s ambition to unseat him from power because of his domestic strength and highly sceptical view of US foreign policies.

But the decision to shut down the State Department’s USAID programme may have lasting and possibly devastating consequences for rights groups that are already starved of domestic support.

Pressure on Memorial and the others rose further this week on news that the Central Bank had drafted a requirement for financial institutions to report all aid being transferred to non-governmental organisation from abroad.

The proposal effectively equates such funding with money laundering operations and terrorism activities.