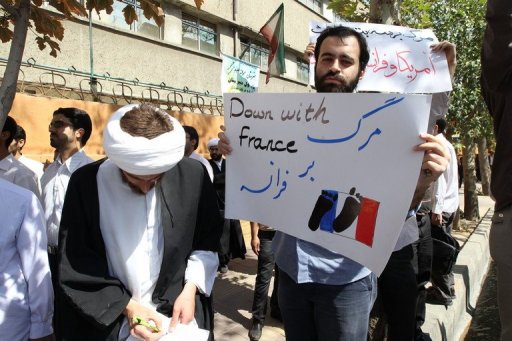 TEHRAN (AFP) — Around 400 people demonstrated in front of the French embassy in Tehran on Sunday to protest inflammatory depictions of Islam’s Prophet Mohammed in an American-made film and in a French satirical magazine.

The crowd, shouting “Death to America,” “Death to Israel,” “Death to Britain” and “Death to France,” was kept away by police in anti-riot gear, witnesses told AFP.

No violence was reported. Witnesses said one officer fired a blank round in warning after a protester threw an egg that hit the outside of the embassy. The demonstration ended after around 90 minutes.

The embassy took security precautions ahead of the protest, minimising staff and closing the French school in Tehran.

The French embassy is one of the most prominent Western missions left in the capital, following last year’s closure of Britain’s embassy after it was stormed by protesters during a state-sanctioned demonstration, and Canada’s decision this month to close its embassy because of fears over its diplomats’ safety.

The United States has had no embassy in Iran since the 1979-1981 hostage crisis in which its diplomats were seized and held by Islamic students.

Iran’s foreign ministry said that day that the Islamic republic “strongly condemns insults against Islamic sanctities” and called the cartoons “an organised plot… by Zionist circles.”

Violent protests have occurred in other Muslim countries over the amateurish American-made film “Innocence of Muslims,” which ridicules Mohammed. Last week, four US officials including the ambassador to Libya, were killed in the eastern Libyan city of Benghazi.