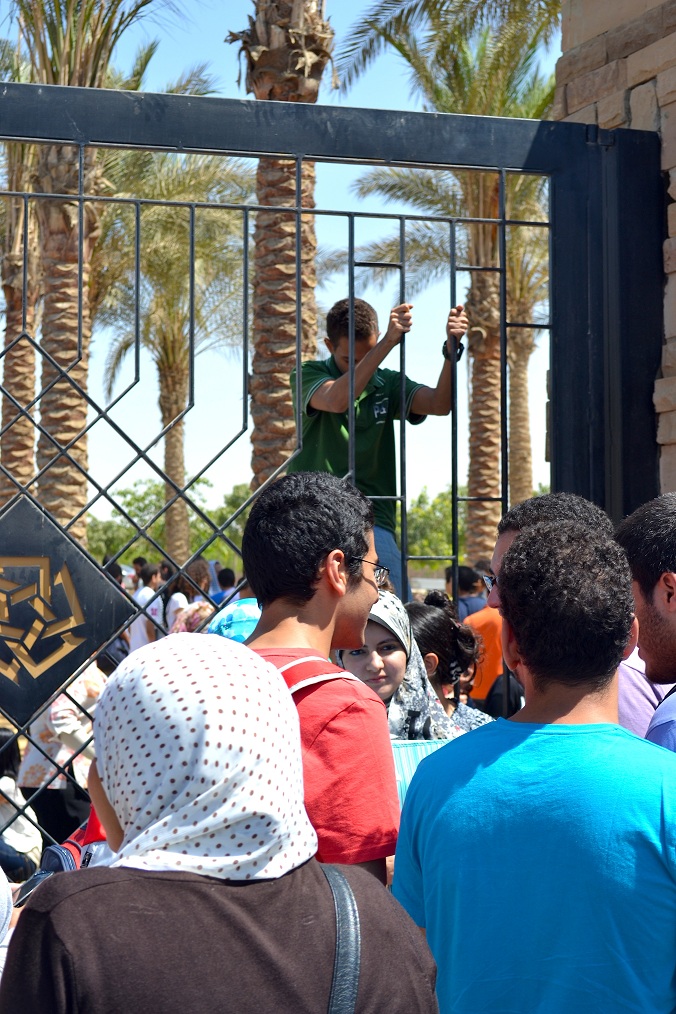 The American University in Cairo (AUC) administration closed its campus on Sunday and subsequently announced the university would suspend all operations until further notice.

“After exhausting all alternatives with the students insisting on closing the gates, the American University in Cairo is suspending operations, including all classes, because of the danger posed by the continuing closure of campus,” read the email sent on Sunday afternoon.

The university senate strongly denounced the actions of student strikers a statement shortly afterward saying, “no one has the right to claim ownership of the campus; it belongs to the entire AUC community.”

This escalation in the standoff in negotiations between striking students and the administration prompting graduate students and AUC alumni to call for an emergency meeting set for Monday evening.

Following attempts by striking students to lock the gates of the campus to prevent people from entering, the AUC administration elected to completely remove the gates to allow free traffic in and out of the campus on Saturday, an act the student movement called “negligent” and “incompetent” in an email to faculty and staff on Sunday.

“We would like to remind you that the current security situation in Egypt has not yet recovered from the security vacuum witnessed due to the Egyptian Revolution,” the email said.

Overnight students propped up fences where the gates had been torn down to continue restricting access to campus.

“This morning when we went to the university all the gates were chained by protesting students, preventing students, faculty, and staff from entering,” said Rehab Saad, director of media relations.

While the students accused the administration of disregarding security issues in the removal of the gates, Saad asserted that blocking the gates provided a security risk, as ambulances and people in emergency situations would not be able to enter or leave the campus.

The failure to resolve the dispute between striking students and the administration prompted AUC alumni and graduate students to call for an emergency meeting scheduled for Monday, in which the group will attempt to reach a solution to present to faculty and staff.

“We just want to add some sense to what is going on,” said Ahmad Abou Hussein, who received his bachelor’s degree from AUC in 2008 and his master’s this year. “We’re all AUCans at the end of the day.”

Abou Hussein indicated that Monday’s meeting would produce collective action after many alumni receive informed perspectives of what has transpired over the past week. “Everyone is blaming each other and no one knows the truth,” he said.

AmiraGabr, a 2010 alumna who will attend Monday’s meeting echoed the same sentiment, “we need to get the facts straight, because a lot of us haven’t attended what has been going on and have heard stories from different sides.”

The group will not only have to assess the appropriate ways for the two sides to come to an agreement, but will seek ways to preemptively curtail similar situations of happening in the future.

Abou Hussein said AUC must have its budget examined, and steps must be taken to remove members from the school’s body associated with corruption and the dissolved National Democratic Party.

Those who have been part of the AUC community are familiar with student strikes, but this year’s have produced more drastic fallout. “I think it’s incremental frustration,” said Abou Hussein.

“The rise of active student groups results in more extreme measures, which is logical, because the administration for a long time has weakened the student union. When you do that, they will definitely need to resort to non-organisational methods.”

Abou Hussein will propose mediation, anti-corruption and governance committees that would provide and audit authority for the university’s budget and work on a structure that enables exchanges between students and the administration to take place in a framework that fosters constructive dialogue.

The student strikers have demanded a cap on tuition for those attending AUC and the curbing of the seven per cent annual increase put on current tuition and fees. “We need to break down the polarisation within the AUC community between those blocking the gates and those who want to go to class,” said Gabr. “I think many agree with the message, but not the method being used.”