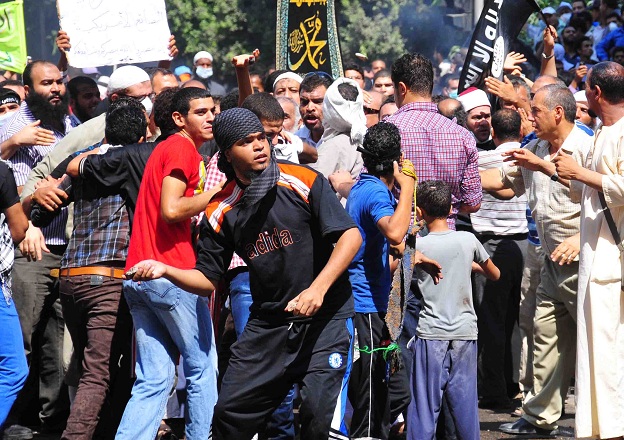 A case is being brought against the controversial Islamist television presenter, Khaled Abdallah, for airing part of the offensive film, Innocence of Muslims, on his show on Al-Nas Channel.

According to independent newspaper, Al-Shorouk, a lawyer in the Ghad Al-Thawra, (Revolution’s Tomorrow) Party said the complaint filed by his party against Abdallah for contempt of religion is being referred to state security prosecution.

A case has also been brought against Abdallah by human rights lawyer, Amr Emam, for instigating protests. Abdallah has denied fueling tensions by airing a few minutes of the 14 minute trailer of the movie dubbed in Arabic.

He told Daily News Egypt that he aired part of the trailer to inform people and he never said anything related to committing acts of violence near the US Embassy in Cairo.

After news spread a movie mocking the prophet Muhammad was to be released on 11 September, coinciding with the 11th anniversary of the attack on the World Trade Centre in New York, violent protests ensued in Egypt as well as throughout the Muslim world denouncing the movie.

Abdallah and a guest had said two days earlier that Egyptian Copts abroad were behind the movie.

It would later be revealed that the movie was not newly released. It was filmed in August 2011 and posted on YouTube last June. The man behind the movie is Nakoula Basseley Nakoula who was first known as Sam Bacile, however Bacile is believed to be an alias of Nakoula’s.

In Egypt protesters scaled the walls of the US Embassy in Garden City, took down the American flag, burned it, and replaced it with a Jihadist flag. At least two died in the violence, and hundreds were left injured. In addition, hundreds were arrested, according to state-run Ahram Online. Around twenty people died across the world as a result of the violent protests at that time.

Egypt’s public prosecutor issued arrest warrants for seven Egyptian Copts living abroad and US pastor Terry Jones, who made calls in 2010 for burning the Islamic holy book, the Quran.

Following reports of the movie, a group of Islamists went to the US Embassy in Cairo, to burn and tear copies of the Bible. These men included  Abu Islam Ahmed Abdallah, the owner of Islamic TV channel Al-Omma TV and his son Abu Yousef who threatened to do something more drastic should such “profanity continue.”

A complaint was filed against Abu Islam with the public prosecutor. Despite the complaint, Abu Islam is defiant, saying he does not regret what he did. He does not recognize the Bible as a holy book.