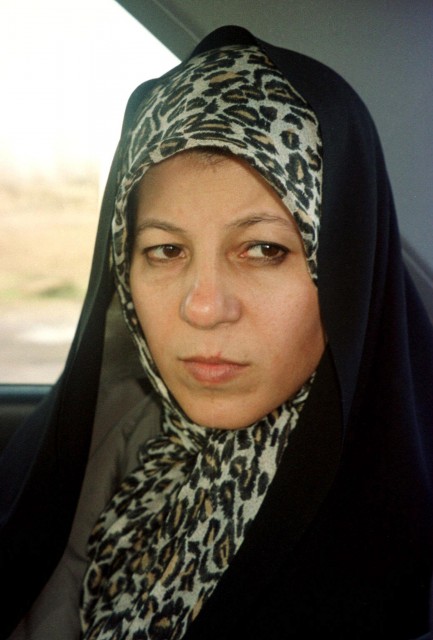 A former member of parliament and daughter of Iranian ex-president, Akhbar Hashemi Rafsanjani, was sentenced to six months in prison Saturday for spreading “anti-state propaganda,” Iran’s IRNA news agency reported. Faezeh Rafsanjani was tried in December 2011 in a closed-court and sentenced in January.

Convicted for an interview in which she was critical of Iran’s human rights violations and economic policy, Faezeh has been taken to the Evin Prison, Tehran, according to Mehr news agency.

Faezeh was arrested in 2009 during the sparked by President Mahmoud Ahmadinejad’s re-election. The government had banned opposition protest.

In February 2011, Faezeh was verbally assaulted on the street by what has been described as hard-line Islamists and plainclothes officers. The crowd chanted “death to Faezeh” and threatened her with violence. That same month, she was briefly detained for participating in an unlicensed opposition protest.

Faezeh is a well-known women’s rights activist in Iran and started a short-lived women’s newspaper in 1998, banned the following year.

The Rafsanjani family has been under scrutiny since Ahmedinejad’s re-election because of their criticism of the current ruling party.

Faezeh Rafsanjani’s brother, Mehdi, has been living in the United Kingdom and, according to Reuters, could be arrested for fomenting unrest after the 2009 elections on his return to Iran.

Rafsanjani ’s father was president of Iran and held several key offices over the past two decades. In 2009, Akhbar Hashemi called for the release of detained opposition figures.

His stance on their imprisonment, which included the defeated candidate Mousavi, won him many opponents and cost him his position as chairman of the Assembly of Experts in 2011.